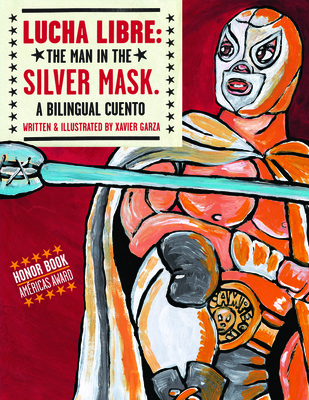 The Man in the Silver Mask: A Bilingual Cuento

The popularity of lucha libre, Mexico's version of professional wrestling, is exploding in the United States, thanks to the television show Mucha Lucha. In Xavier Garza's bilingual kids' book about this wild and crazy sport, young Carlitos attends a lucha libre match in Mexico City for the first time. He's with his Pap Lupe, but his Tio Rodolfo, who's supposed to join them, doesn't show up. At ringside, Carlitos sees the famous luchador, el Santo--the Man in the Silver Mask, a man whose eyes look terribly familiar. El Santo even smiles at Carlitos Carlitos is mesmerized as el Santo is pitted against the terrible forces of evil--los rudos, the bad guys of lucha libre. They make the audience boo and hiss In the end, though, el Santo triumphs and, in the process, gains a lifelong fan.

Kids of all ages are drawn to the allure of lucha libre and its masked men and women. In Lucha Libre, young fans will see this fascinating world come alive: Favorite heroes and much-feared villains, dressed in dazzling and outrageous costumes, strut and prance across the mat and bounce against the ropes, daring anyone to take them to the floor

Born and raised in the Rio Grande Valley, lucha libre aficionado Xavier Garza is a prolific author, artist and storyteller whose work focuses primarily on his experiences growing up in the small border town of Rio Grande City. Garza has exhibited his art and performed his stories in venues throughout Texas, Arizona and Washington. Garza and his wife live in San Antonio, Texas. He published his first book, Creepy Creatures and Other Cucuys (Arte P blico Press), in 2004.


Praise For Lucha Libre: The Man in the Silver Mask: A Bilingual Cuento…

“The fluid colloquial English and Spanish and grainy graphic-novel style illustrations executed in acrylics make for an attractive package with definite appeal for boys. This title is sure to become popular.” — Críticas, starred review

“Garza’s illustrations are oversized, wildly colored and presented in bold outlines, recalling both Mexican folk art and the rowdy spirit of the stylized sport. They are sure to draw in every wrestling fan under the age of 10.” — Kirkus

"This is a really fun book for little lucha libre fans." —NBC Latino

“Recommended! Children familiar with the sport will welcome the vibrant visual paean, while fans of wrestling, comic-book superheroes, and all things pugilistic will wonder where lucha libre has been all their lives. — The Bulletin of the Center for Children’s Books

"The sport [lucha libre] became 'a poor man’s theater,' according to Garza. The masked fighters, known as 'luchadores,' are classified as either 'tecnicos' (working-class heroes who play by the rules) or 'rudos' (bad guys who use dirty tactics to get ahead). It’s the classic struggle between good and evil. 'Somehow, in the nick of time, the good guy will triumph,' Garza said. 'And if he doesn’t, it’s to set up a bigger match down the road.'"—Boston Herald Review

"Without resorting to the kitsch or comedy that plagues so many other pop portrayals of these masked men, Garza's hyper-exaggerated, vibrant illustrations spring to life from the book's pages and convey an aura of reverence and awe befitting his young protagonist. Carlitos has a blast and, chances are, you will, too. It's the next best thing to having front-row seats for the Friday-night match." — San Antonio Current

"For the kids is the main event, about a youngster whose father takes him to watch wrestling while visiting his big bicep-ed tio Vicente, who suspiciously is never there when the Man in the Silver Mask is…For the grown-ups, the story is followed by 'a brief but tremendously exciting history' of lucha libre. Both age groups should appreciate Garza’s paintings, with their folk art/street mural vibe, thick line strokes and white-warm colors—even if it’s for different reasons." —Alive Columbus

"Narrated by a young lucha libre fan, The Man in the Silver Mask tells the story of a boy’s trip with his Papá Lupe to a match. The eye-popping illustrations, by author Xavier Garza, highlight the exciting world of Mexican wrestling where the action is brutal, the crowd goes wild, and real men wear masks."—El Paso Inside & Out Magazine

"Wrestling matches in Mexico feature good guys (los tecnicos) and bad guys (los rudos). At the match in Mexico City, Carlito wishes his Tio Vicente could be there, but the famous luchador The Man in the Iron Mask has eyes that look very familiar…Garza highlights the power of wrestling (Lucha libre) in Mexico, and the mythology of good and evil played out on the wrestling stage." —Yellow Brick Road

"[The] dramatic tension is subtle throughout the book, particularly in contrast to the bold illustrations and poster-style design, which are more exciting than the narrative. Garza includes a valuable addendum regarding the history of lucha libre, which is informative without being inaccessible to children."—Children's Literature