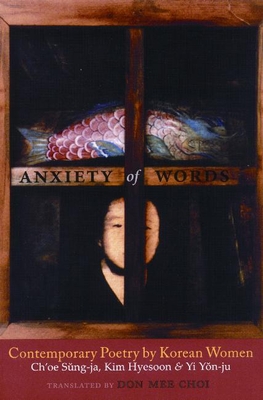 Anxiety of Words focuses on the work of three contemporary Korean women poets whose fierce poetic voices display a critical consciousness of women's lives under patriarchy, capitalism, and neocolonialism. Each poet is represented, in bilingual format, by approximately twenty poems and a biographical introduction. The volume also contains a detailed introduction to the Korean poetry scene by translator Don Mee Choi, with a focus on the historical and contemporary role of women poets in Korea.

The poetry of Ch'oe Sung-ja, Kim Hyesoon, and Yi Yon-ju consistently violates the literary expectations of gentle and subservient yoryu (female) poetry through innovative language and depictions of Korean women's identities and struggles.

Ch'oe employs a confessional device that opposes and resists her outside world--the patriarchy. Kim employs conversational schemes that involve dialogues between multiple selves within a woman to discover her own identity, and Yi, before her suicide, embraced the language of decay and death, while her stark and powerful language was created in relation to the lives of economically and socially marginalized women in Korean society.
By challenging literary and gender expectations, Ch'oe, Kim, and Yi occupy a marginalized position in Korean society as women and poets. In the context of South Korea's highly patriarchal and structured society, their poetry is defiant and revolutionary.

Ch'oe Sung-ja (b. 1952) is one of the most well-known and highly regarded contemporary women poets of South Korea. In 1979, Ch'oe became the first woman poet to be published in a literary journal. Ch'oe's poetry violated the criteria of decorum that had been long imposed on women poets. She is a member of Another Culture (Ttohana ui munhwa), which emerged in the 1980s and has played a critical role in feminist literary research and publication, including development of women's studies in South Korea. Kim teaches creative writing and Korean poetry at Seoul College of Arts. Yi's first book of poetry, A Night Market Where There Are Prostitutes, was published by Sekyesa, a well-known literary press in South Korea. Yi's second collection of poems was published in 1993 after her death. Yi committed suicide in 1992. Yi's poetry has a critical place in the feminist poetry of the 1980s. Literary translator and scholar of contemporary Korean literature, Don Mee has received grants from the Korean Literature Translation Institute, Seoul and the Sunshik Min Endowment for the Advancement of Korean Literature.
Loading...
or
Not Currently Available for Direct Purchase