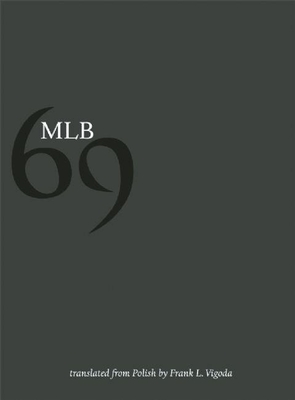 One of the principal authors of the "brulion" generation, which has been influenced largely by American poets such as Frank O'Hara, Allen Ginsberg, and John Ashbery, MLB (Milosz Biedrzycki) has published six volumes of poetry and received numerous prestigious literary prizes. English translations of his work have appeared in, among others, Traf ka, Chicago Review, Fence, Zoland Poetry, and the Zephyr Press anthology Carnivorous Boy Carnivorous Bird.

MLB's writing represents a continuation in the development of contemporary Polish poetry, which tends to be less narrative and more intellectual and language-oriented than its American counterpart. His extraordinary linguistic awareness and amused wonderment with language as a rather curious means of communication lurks beneath all his poetry.

The work included here is from MLB's 2006 volume in Poland, 69, which encompasses his poetic output from the fall of Communism to the present, allowing the reader to trace the process of personal and artistic development during the rapidly changing post-Communist years.

the dog already swallowed half the moon, someone
installed a Soviet-era radio instead of a speedometer.
the car speeds through the night winding the black
pasta of the road onto its wheels. the Soviet radio
plays speeches by Sch nberg, the air,
the border past Mikulov barely noticed--
except the lines on the road are now infinitely
more visible. villages are equally quiet.
the rain, a light one, still managed to break free
from the sky.

Frank L. Vigoda is a literary translator based in Riverside, California.

Author of six volumes of poetry in his native Poland, he has been awarded poetry prizes by the periodicals bruLion and Czas kultury. English translations of his poems have appeared in Trafika, Chicago Review, Fence, and the Zephyr Press anthology Carnivorous Boy Carnivorous Bird. Frank L. Vigoda is a literary translator based in Riverside, California. He translates from the Polish, primarily poetry. His translations have appeared in a variety of publications including Modern Poetry in Translation, Polin: Studies in Polish Jewry, Lyric Poetry Review, Chicago Review, Absinthe: New European Writing, Circumference, and Fence.
Loading...
or support indie stores by buying on