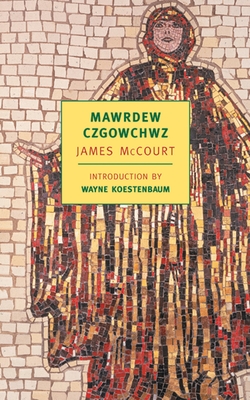 Diva Mawrdew Czgowchwz (pronounced "Mardu Gorgeous") bursts like the most brilliant of comets onto the international opera scene, only to confront the deadly malice and black magic of her rivals. Outrageous and uproarious, flamboyant and serious as only the most perfect frivolity can be, James McCourt's entrancing send-up of the world of opera has been a cult classic for more than a quarter-century. This comic tribute to the love of art is a triumph of art and love by a contemporary American master.

"McCourt is the author of perhaps the best novel about opera." —Publishers Weekly


"McCourt makes brave comic choices, delighting in mythic celebrity while dissecting the ways it is made and sustained. Bravo! Encore!" —John Lahr

"Bravo, James McCourt, a literary countertenor in the exacting tradition of Firbank and Nabokov, who makes his daringly self-assured debut with this intelligent and very funny book." —Susan Sontag

"Mawrdew Czgowchwz is a Zuleika Dobson of the opera world. James McCourt is an ecstatic fabulist, robustly funny and inventive, and touchingly in love with his subject. His novel is both special and precious, in the most honorable senses of those words." —Newsweek

"A gloriously flamboyant debut. Take it in spoonfuls and you’ll find passages to fall in love with. Sooner or later, you may even find yourself reading them aloud to your friends." —Christopher Lehmann-Haupt, The New York Times

James McCourt was born in New York City and attended Manhattan College, NYU, the Yale School of Drama, and the Old Met. Among his works of fiction and nonfiction are Mawrdew Czgowchwz, Wayfaring at Waverly in Silver Lake, and Queer Street: The Rise and Fall of an American Culture, 1947-1985. He lives in New York City.

Wayne Koestenbaum has published five books of critical prose, including The Queen’s Throat: Opera, Homosexuality, and the Mystery of Desire, which was a National Book Critics Circle Award finalist; and three books of poetry, including Ode to Anna Moffo and Other Poems. He is a Professor of English at the Graduate Center of the City University of New York.
Loading...
or
Not Currently Available for Direct Purchase