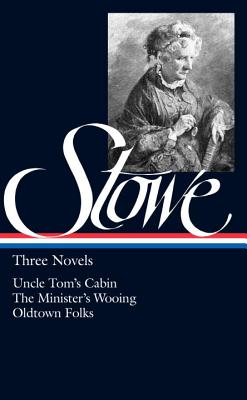 In this Library of America volume are the best and most enduring works of Harriet Beecher Stowe, “the little woman,” as Abraham Lincoln said when he met her in 1861, “who wrote the book that made this great war.” He was referring, with rueful exaggeration, to Uncle Tom’s Cabin (1852), which during its first year had sold over 300,000 copies. Contemporary readers can still appreciate the powerful effects of its melodramatic characterizations and its unapologetic sentimentality. They can also recognize in its treatment of racial violence some of the brooding imagination and realism that anticipates Faulkner’s rendering of the same theme. Stowe was charged with exaggerating the evils of slavery, but her stay in Cincinnati, Ohio, where her father (the formidable Lyman Beecher, head of the Lane Theological Seminary) gave her a close look at the miseries of the slave communities across the Ohio River. People in her circle of friends were continually harboring slaves who escaped across the river from Kentucky on the way, they hoped, to Canada.

Two other novels, along with Uncle Tom’s Cabin, show the range and variety of her literary accomplishment. The Minister’s Wooing (1859) is set in Newport, Rhode Island, after the Revolution. It is a romance based in part on the life of Stowe’s sister, and it traces to a happy ending the conflicts in a young woman between adherence to Calvinistic rigor and her expression of preference in the choice of a marital partner. The third novel, Oldtown Folks (1869), confirms Stowe’s genius for the realistic rendering of ordinary experience, her talent for social portraiture with a keen satiric edge, and her subtlety in exploring a wide group of themes, from child-rearing practices and religious controversy to romantic seduction and betrayal. But finally, it is the old town and a way of life that no longer exists that is the true subject of this elegiac novel.

Harriet Beecher Stowe (1811-1896) was born in Litchfield, Connecticut, daughter of the Reverend Lyman Beecher of the local Congregational Church. In 1832, the family moved to Cincinnati, where Harriet married Calvin Ellis Stowe, a professor at the seminary, in 1836. The border town of Cincinnati was alive with abolitionist conflict and there Mrs. Stowe took an active part in community life. She came into contact with fugitive slaves, and learned from friends and from personal visits what life was like for the Negro in the South. In 1850, the Fugitive Slave Law was passed, and that same year Harriet’s sister-in-law urged the author to put her feelings about the evils of slavery into words. Uncle Tom’s Cabin was first published serially during 1851-52 in The National Era, and in book form in 1852. In one year more than 300,000 copies of the novel were sold. Mrs. Stowe continued to write, publishing eleven other novels and numerous articles before her death at the age of eighty-five in Hartford, Connecticut.
Loading...
or
Not Currently Available for Direct Purchase