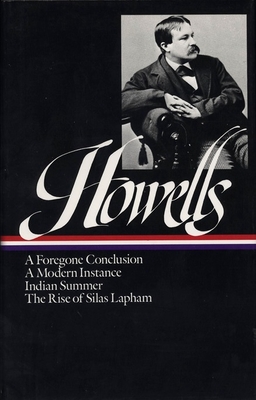 The four novels collected in this Library of America volume are among the classic works from the immensely productive career of America’s most influential man of letters at the turn of the twentieth century. William Dean Howells was a champion of French and Russian realistic writers and a brilliant advocate of the most controversial American writers of his own time.

In A Foregone Conclusion (1875), a young American painter roams through Europe for years before at last deciding to marry the woman who, he erroneously thinks, has been in love with an Italian priest turned agnostic. A Modern Instance (1882) offers an unflinching portrait of an unhappy marriage and ends with a hero barred by his perhaps overscrupulous conscience from marrying the divorced heroine. Once again personal dilemmas are seen as symptoms of the rapid displacement of older social and religious stabilities by opportunism and commercial progress.

One of the most engaging of all his novels, Indian Summer(1885), is touched with the Jamesian glamour of romantic confusion among two American couples in Italy. Here Howells’s realism takes a quietly humorous turn. Situations which might be exploited by another novelist for their theatrical or melodramatic possibilities are instead eroded by the often trivial or casual experiences of everyday living. Characteristically, Howells is opposed to exaggeration in the interest of discovering how people, despite the crises that beset them, manage to find their way.

The Rise of Silas Lapham (1885), Howells’s best-known work, gives a brilliantly skeptical portrait of American business life and its perils, celebrating not the rise but the loss of fortune that makes possible the hero’s recovery of his earlier integrity and happiness. “There are,” remarked a contemporary reviewer, “thousands of Silas Laphams throughout the United States,” and present-day readers might agree that there still are.

William Dean Howells was born in Martins Ferry, Ohio, on March 1, 1837. Between 1856 and 1861 he worked as a reporter for the Ohio State Journal. His campaign biography of Abraham Lincoln, compiled in 1860, led to a consulship at Venice from 1861 to 1865. In 1871 he became editor-in-chief of the Atlantic Magazine, where worked with many young writers, among them Mark Twain and Henry James, both of whom became close friends. His position as critic, writer, and enthusiastic exponent of the new realism earned William Dean Howells the respected title of Dean of American Letters. He died in 1920.

Edwin H. Cady, volume editor, is Andrew W. Mellon Professor of Humanities, Emeritus, at Duke University. He has written extensively on American literature and cultural history and is an editor of American Literature and of A Selected Edition of W.D. Howells, published by the Indiana University Press.
or
Not Currently Available for Direct Purchase
Copyright © 2020 American Booksellers Association