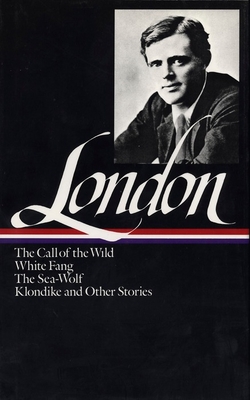 Novels and Stories (LOA #6): The Call of the Wild / White Fang / The Sea-Wolf / Klondike and other stories (Library of America Jack London Edition #1)

This Library of America volume of Jack London’s best-known work is filled with thrilling action, an intuitive feeling for animal life, and a sense of justice that often works itself out through violence. London enjoyed phenomenal popularity in his own time (which included the depressions of the 1890s and the beginnings of World War One), and he remains one of the most widely read of all American writers.

The Call of the Wild (1903), perhaps the best novel ever written about animals, traces a dog’s sudden entry into the wild and the education necessary for his survival in the ways of the wolf pack. Like many of London’s stories, this one is inspired by the early deprivations of his own pathetically short life: the primitive conditions of life as an oyster pirate in San Francisco; the restless existence of a hobo; the isolation of a prison inmate; the exertion of a laborer in the Oakland slums; and the frustration of a failed prospector for gold in the Alaskan Klondike.

White Fang (1906), in which a wolf-dog becomes domesticated out of love for a man, is apparently the reverse side of the process found in The Call of the Wild, yet for many readers its moments of greatest authenticity are those which suggest that, in actual practice, civilization is pretty much a dog’s life for everyone, of “hunting and being hunted, eating and being eaten, all in blindness and confusion, with violence and disorder, a chaos of gluttony.”

Though London was a reader of Marx and Nietzsche and an avowed socialist, he doubted that socialism could ever be put into practice and was convinced of the necessity for a brutal individualism. He thought of The Sea-Wolf (1904), the story of Wolf Larsen and his crew of outcasts on the lawless Alaskan seas, as “an attack upon the superman philosophy,” but the Captain is far more memorable than any of the book’s civilized characters. London is an immensely exciting writer partly because the conflicts in his thinking tend to enhance rather than hinder the romantic and thrilling turns of his plots.

The stories of the Klondike, which are based on his personal experiences and the stories of California, Mexico, and the South Seas, span the whole of London’s career as a writer. He is one of the great storytellers in American literature, and his politics, with all their passion and contradiction, come to life through the vigor and red-blooded energy of his prose.

John Griffith "Jack" London (1876–1916) is an American author, journalist, and social activist. Some of his most famous works include The Call of the Wild and White Fang, as well as the short stories "To Build a Fire", "An Odyssey of the North", and "Love of Life".
Loading...
or
Not Currently Available for Direct Purchase