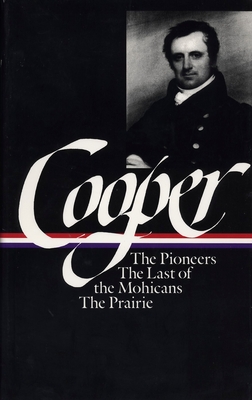 The Leatherstocking Tales Vol. 1 (LOA #26): The Pioneers / The Last of the Mohicans / The Prairie (Library of America James Fenimore Cooper Edition #1)

The five novels in The Leatherstocking Tales (collected in two Library of America volumes), Cooper's great saga of the American wilderness, form a pageant of the American frontier. Cooper's hero, Natty Bumppo, is forced ever farther into the heart of the continent by the advance of civilization that he inadvertently serves as advance scout, missionary, and critic.

Leatherstocking first appears in The Pioneers (1823), as an aged hunter living on the fringe of settlement near Templeton (Cooperstown), New York, at the end of the eighteenth century. There he becomes caught in the struggles of party, family, and class to control the changing American land and to determine what sort of civilization will replace the rapidly vanishing wilderness. When Natty Bumppo started an American tradition by setting off into the sunset at the novel's close, one early reader said, "I longed to go with him."

The Last of the Mohicans (1826) is a pure unabashed narrative of adventure. It looks back to the earlier time of the French and Indian Wars, when Natty and his two companions, Chingachgook and Uncas, survivors of a once-proud Indian nation, attempt a daring rescue and seek to forestall the plan of the French to unleash their Mingo allies on a wave of terror through the English settlements.

The Prairie (1827) takes up Natty in his eighties, driven by the continuous march of civilization to his last refuge on the Great Plains across the Mississippi. On this vast and barren stage, the Sioux and Pawnee, the outlaw clan of Ishmael Bush, and members of the Lewis and Clark expedition enact a romantic drama of intrigue, pursuit, and biblical justice that reflects Cooper's historical dialectic of culture and nature, of the American nation and the American continent.

James Fenimore Cooper (1789-1851) grew up at Otsego Hall, his father’s manorial estate near Lake Otsego in upstate New York. Educated at Yale, he spent five years at sea, as a foremast hand and then as a midshipman in the navy. At thirty he was suddenly plunged into a literary career when his wife challenged his claim that he could write a better book that the English novel he was reading to her. The result was Precaution (1820), a novel of manners. His second book, The Spy (1821), was an immediate success, and with The Pioneers (1823) he began his series of Leatherstocking Tales. By 1826 when The Last of the Mohicans appeared, his standing as a major novelist was clearly established. From 1826 to 1833 Cooper and his family lived and traveled in France, Switzerland, Italy, and Germany. Two of his most successful works, The Prairie and The Red Rover, were published in 1827. He returned to Otsego Hall in 1834, and after a series of relatively unsuccessful books of essays, travel sketches, and history, he returned to fiction – and to Leatherstocking – with The Pathfinder (1840) and The Deerslayer (1841). In his last decade he faced declining popularity brought on in part by his waspish attacks on critics and political opponents. Just before his death in 1851 an edition of his works led to a reappraisal of his fiction and somewhat restored his reputation as the first of American writers.
Loading...
or
Not Currently Available for Direct Purchase