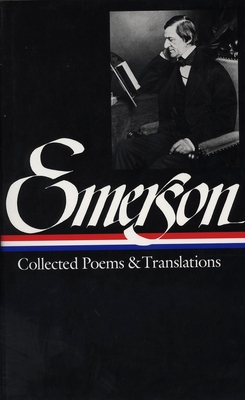 Emerson’s incomparable brilliance as a prose writer has often overshadowed his remarkable gifts as a poet. Gathering both published and unpublished work, this Library of America edition makes available for the first time to general readers the full range of Emerson’s poetry, including many poems left in manuscript at his death that have hitherto been available only in drastically edited versions or specialized scholarly texts. Displacing all previous editions in its comprehensiveness and textual authority, this volume reveals the ecstatic, mystical, and private meditative sides of one of the greatest of all American writers.

All the poetry Emerson published during his lifetime is included in this single volume. His collections, Poems (1847), May-Day and Other Pieces (1867), and Selected Poems (1876), as well as other pieces written for magazines, fuse close observations of the New England landscape with far-reaching spiritual explorations. His familiarity with botany and geology, Greek philosophy, Persian poetry, and anti-slavery politics gives his writing an intellectual breadth, and a challenging, continuing modernity unique among American poets of his time.

More than half the volume is devoted to a generous selection of poetry from Emerson’s journals and notebooks, ranging from his childhood to his final years as a writer. This work—printed here as Emerson wrote it, without the revisions imposed by earlier editors—is a revelation: a bounty of formal experimentation and speculative thought that displays, as in a painter’s sketchbook, the creative process at work.

Also included are Emerson’s little-known poetic translations, chiefly from the Persian poets Hafiz and Saadi, whose fusion of sensuality and mysticism so profoundly influenced his poetic thinking. With them is the complete La Vita Nuova (The New Life), Dante’s meditation on love that Emerson translated into English for the first time.

A surprise awaits those who think of Emerson only as an essayist… For a personal close-up of a public man, here are evidences of eros, mourning and celebration.” —Christian Century

Harold Bloom and Paul Kane, volume editors, are, respectively, Sterling Professor Emeritus of the Humanities at Yale University, and assistant professor of English at Vassar College.
Loading...
or
Not Currently Available for Direct Purchase