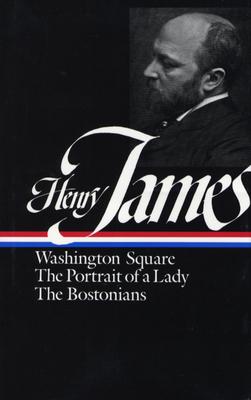 Written in London and Italy between 1879 and 1885, the novels in this Library of America volume portray American women confronting crises of independence and possession. Studies in the exercise of power that marks relations between sexes, classes, and cultures, they show James’s special solicitude for the young heroines who occupy the center of his fictional world.

Washington Square (1880) examines the life of Catherine Sloper, a plain, sweet, young woman who lives imprisoned by the selfishness of those close to her: her lover, who cares only for her fortune; her aunt, who meddles for the sake of romantic intrigue; and her protective father, who repays her adoration with irony and wit. Set in the New York of the 1840s, Washington Square evokes the still-intimate city of James’s childhood while presenting a frightening moral lesson in the human consequences of manipulation and indifference.

The Portrait of a Lady (1881) is the story of Isabel Archer, a beautiful, idealistic, and inexperienced American woman who is made wealthy by her uncle at the instigation of her dying cousin. Surrounded by the seductive pleasures of nineteenth-century Europe, she preserves her idealism despite involvement with some who would divert her life to uses of their own—Caspar Goodwood, virile American captain of industry; Lord Warburton, scion of British aristocracy; Gilbert Osmond, connoisseur and collector of beautiful objects; Madame Merle, subtle and charming expatriate of unknown connections; and indomitable Henrietta Stackpole, roving journalist and steadfast friend. James’s many-layered masterpiece concerns the perilous American pursuit of individual freedom.

The Bostonians (1886) presents an unusual contest for the affections of Verena Tarrant, the lovely, naïve, and pliant daughter of a mesmerist lecturer. She is courted by two cousins: Basil Ransom, an impractical Mississippi landowner now pursuing a meager New York legal practice, and Olive Chancellor, a rich young Boston feminist. Against the richly textured backdrop of Boston and New York society, they enact a drama of confused identity and willful calculation that demonstrates the power and the perils engendered by the refusal of self-knowledge.