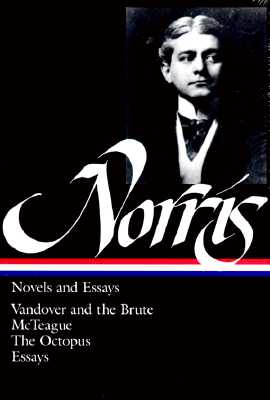 Novels and Essays (LOA #33): Vandover and the Brute / McTeague / The Octopus / collected essays

This Library of America volume presents three novels and the collected essays of the most promising of the American naturalist writers. Inspired by the “new novel” developed by Zola and Flaubert, Frank Norris adapted its methods to American settings, adding his own taste for exciting action and a fascination with the emergent sciences of economics and psychology.

Vandover and the Brute (1914) was published posthumously but written in 1895 during Norris’s year at Harvard. Drunkenness, sensuality, gambling, and debauchery reduce young Vandover, once a fashionable playboy and aspiring artist, to virtual bestiality. His dissipation is described with shocking realism, as Norris paints each level of San Francisco society he encounters in his descent.

The novel McTeague (1899) represented a radical departure for American fiction of its era in its frank treatment of sex, domestic violence, and obsession. McTeague is a huge, simple dentist who dreams of having a giant tooth to hang outside his office and who carries his pet canary wherever he goes; Trina is his gentle, diminutive wife, who wins a lottery and compulsively hoards her money. They live on Polk Street in San Francisco, where the new middle class struggles with its pathological underside. Erich von Stroheim based his classic film Greed (1924) on this immensely powerful and grimly realistic novel.

The Octopus (1901), the first work in Norris’s unfinished trilogy “The Epic of the Wheat,” is a novel about the ranchers and wheat producers of California. Pitted against the railroad monopoly and political machine, the members of the ranching community are forced to take up arms against the state. Inspired by the Mussel Slough Massacre of 1880, it depicts a band of strong ruthless Westerners who are crushed by inexorable forces of nature and capital they had sought to control.

The twenty-two essays in this volume include book reviews, articles, literary columns, and parodies of popular authors in the hilarious “Perverted Tales.”

Born in Chicago in 1870, Frank Norris moved with his family to San Francisco in 1885. After studying art in Paris and literature at Berkeley and Harvard, he worked as a journalist and foreign correspondent, was expelled from South Africa in 1896, and reported on the Spanish-American War from Cuba in 1898, where he met Stephen Crane. Joining the publishing firm of Doubleday & McClure in 1898, he met William Dean Howells, Hamlin Garland, and Theodore Dreiser, and published six novels between 1898 and 1902. He died following an attack of appendicitis in October of 1902.

Donald Pizer, volume editor, is Emeritus Professor of English at Tulane University. He is the author of The Novels of Frank Norris, The Novels of Theodore Dreiser: A Critical Study, and Twentieth-Century American Literature Naturalism: An Interpretation.