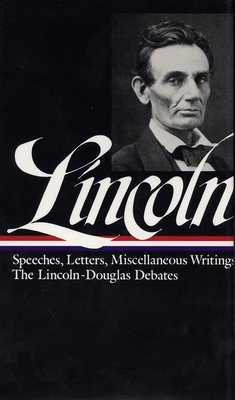 Abraham Lincoln measured the promise—and cost—of American freedom in lucid and extraordinarily moving prose, famous for its native wit, simple dignity of expressions, and peculiarly American flavor. This volume, with its companion, Abraham Lincoln: Speeches and Writing 1859–1865, comprises the most comprehensive selection ever published. over 240 speeches, letters, and drafts take Lincoln from rural law practice to national prominence, and chart his emergence as an eloquent antislavery advocate and defender of the constitution. included are the complete Lincoln-Douglas debates, perhaps the most famous confrontation in American political history.

“The Library of America in its reissue of American literary classics…has been the most satisfying (and, I suspect, the most lasting) publishing event of my lifetime. The two volumes of Lincoln’s complete writings, superbly edited by Don E. Fehrenbacher, … are the capstone of this splendid continuing series.” —Alfred Kazin, The New York Times Book Review

Don E. Fehrenbacher (1920-1997) was professor of history at Stanford University. He was the author of several books, including Prelude to Greatness: Lincoln in the 1850's, The Dred Scott Case: Its Significance in American Law and Politics, and Lincoln in Text and Context.
Loading...
or
Not Currently Available for Direct Purchase