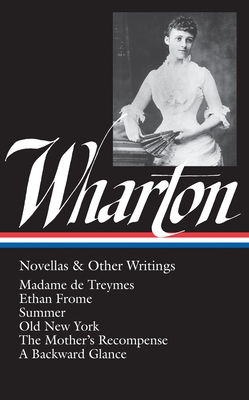 Collected in this Library of America volume are no fewer than six of the works of Edith Wharton: novels, novellas, and her renowned autobiography, A Backward Glance. Together they represent nearly a quarter century in the productive life of one of the most accomplished and admired of American writers.

Madame de Treymes (1907) is set in fashionable Paris society, where a once free-spirited American woman is trying to extricate herself, with the help of a fellow countryman, from her marriage to an aristocratic Frenchman.

Such a village is the scene of Ethan Frome (1911), a tale of marital entrapment even more relentless. Ethan’s unhappy marriage and his desperate love for his wife’s cousin Mattie drive him to an act of shattering violence. The magnificent coda is a classic of American realistic fiction.

Set in the same region of the Berkshires, Wharton called Summer (1917) “the Hot Ethan.” It is the story of a young woman’s initiation into the intricate sexual and social mores of a small town—and her revolt against them.

Observations of the American scene continue in the four novellas that make up Old New York (1924). They take us from the 1840s of “False Dawn,” where a young man is ostracized for his avant garde taste in art, to the 1870s of “New Year’s Day,” where a domestic scandal unfolds.

The poignancies of parenthood are also the theme of The Mother’s Recompense (1925). Kate Clephane, a divorced woman who has been living in Europe, returns to New York to find her former lover engaged to her daughter—and to face the emotional tangles of this unusual triangle.

The fullest portraits of New York are saved for A Backward Glance (1934), one of the most compelling of American autobiographies. Another perspective is offered in “Life and I,” an autobiographical fragment that shows a younger Wharton writing with great frankness about her early life. It is published here for the first time.

“The Library of America has now followed its initial Wharton collection, containing the major novels, with a second one devoted to her shorter fiction and autobiographical writings. . . . Edith Wharton’s triumph as an artist is finally that her personal quest for identity became the basis for a larger vision. Cynthia Griffin Wolff traces the writer’s evolution from emotionally disenfranchised child to completely realized novelist.” —New York Newsday

Cynthia Griffin Wolff, volume editor, is professor of Literature emerita at the Massachusetts Institute of Technology and the author of A Feast of Words: The Triumph of Edith Wharton.
Loading...
or
Not Currently Available for Direct Purchase