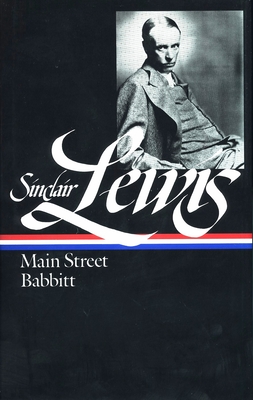 In Main Street and Babbitt, Sinclair Lewis drew on his boyhood memories of Sauk Centre, Minnesota, to reveal as no writer had done before the complacency and conformity of middle-class life in America. The remarkable novels presented here in this Library of America volume combine brilliant satire with a lingering affection for the men and women, who, as Lewis wrote of Babbitt, “want “to seize something more than motor cars and a house before it’s too late.”

Main Street (1920), Lewis's first triumph, was a phenomenal event in American publishing and cultural history. Lewis's idealistic, imaginative heroine, Carol Kennicott, "longs to get [her] hands on one of those prairie towns and make it beautiful,” but when her doctor husband brings her to Gopher Prairie, she finds that the romance of the American frontier has dwindled to the drab reality of the American Middle West. The great romantic satire of its decade, Main Street is a wry, sad, funny account of a woman who attempts to challenge the hypocrisy and narrow-mindedness of her community.

In 1930 Sinclair Lewis was the first American to be awarded the Nobel Prize in Literature, largely for his achievement in Babbitt. These early novels not only define a crucial period in American history—from America’’s “coming of age” just before World War I to the dizzying boom of the twenties—they also continue to astonish us with essential truths about the country we live in today.

“Lewis is to slang what Mark Twain is to dialect. He has a grotesque facility for reproducing it, a talent like playing the saw or cracking knuckles…. Lewis has some of the sharpest nails on the American blackboard.” —GQ

Sinclair Lewis was born in 1885 in Sauk Centre, Minnesota, and graduated from Yale University in 1908. With the publication of Main Street (1920), which sold half a million copies, he achieved wide recognition. This was followed by the two novels considered by many to be his finest, Babbitt (1922) and Arrowsmith (1925), which was awarded the Pulitzer Prize in 1926, but declined by Lewis. In 1930, following Elmer Gantry (1927) and Dodsworth (1929), Sinclair Lewis became the first American author to be awarded the Nobel Prize for distinction in world literature.

John Hersey (1914–1993), volume editor, published fifteen books of fiction and nine of reportage and essays, and was awarded the Pulitzer Prize for Fiction. In 1937 he served as Sinclair Lewis’’s secretary.
Loading...
or
Not Currently Available for Direct Purchase