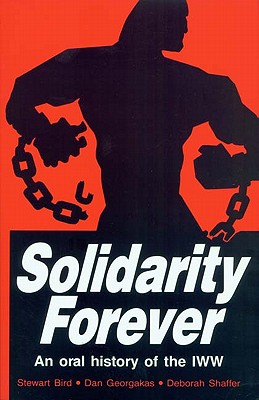 An Oral History of the IWW

Millions of Americans enjoy liberties off and on the job that were pioneered by a working class organization that few of them are familiar with—the Industrial Workers of the World (IWW).
The standard of living for most working Americans was grim when the IWW was founded in 1905. Wages were low, housing squalid, civil liberties limited, safety regulations nonexistent, and job security tenuous. Employers routinely denied their workers the right to unionize, much less to strike or picket. Few major labor disputes ended without death playing a hand.
In Solidarity Forever, a score of IWWs tell how they fought against these injustices while advocating a new economic system in which production would be geared for the public good rather than for private profit.
They speak at length of the life and culture of a modern working class during its formative years, often touching on historic labor struggles as well as more humble local conflicts. Told with vigor and humor, these first-hand accounts attest to the IWW passion for mass education, popular culture, and grass roots democracy, and they reveal an IWW far more ideologically sophisticated than is generally acknowledged.
Historical essays preface these personal stories and place them in the context of the IWW commitment to civil liberties, women's rights, organizing the unorganized, and racial equality.
An oral history based on interviews done for the award-winning documentary, The Wobblies, by filmmakers Stewart Bird and academy-award-winning director Deborah Shaffer, with historical introductions to each section of interviews by labor historian Dan Georgakas, co-editor of the monumental Encyclopedia of the American Left.