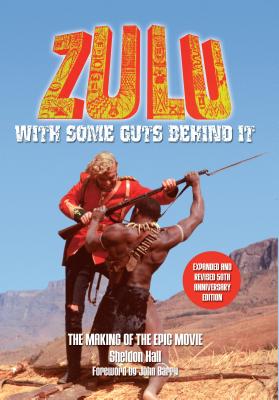 THE EPIC BOOK ABOUT THE EPIC MOVIE – NOW IT’S BACK!

One of the best-loved and most enduringly popular British films ever made, Zulu tells the epic story of the Battle of Rorke’s Drift of 1879, in which barely 150 soldiers of the British Army in South Africa fought for twelve hours to defend an isolated mission station against an attack by 4,000 highly disciplined Zulu warriors. Here is the full story of its making, based on years of original research and dozens of interviews with cast and crew members and their families.

In this fully revised and expanded Second Edition of Sheldon Hall’s highly acclaimed, sell-out book you will find additional material including a first-hand account of the film’s shooting and post-production by the personal assistant to the producers; never-before-seen insider information on the financing of the production; a critical account of the film itself; and over a hundred new illustrations, some never before published, including a new colour section.

Carried over from the First Edition are the full original main text, including extracts from the screenplay and script notes; letters and production documents; biographies of all the principal actors and filmmakers; screenwriter John Prebble’s original magazine article on Rorke’s Drift; and hundreds of rare and unusual images.

Sheldon Hall lectures in Stage and Screen Studies at Sheffield Hallam University and has written and taught on many aspects of the cinema. He studied Film and Literature at the University of Warwick and received his Masters and Doctorate from the University of East Anglia. A former freelance journalist, reviewing film and theatre for The Northern Echo from 1986 to 1997, he has published articles in such journals as Cinema Retro, Empire, Film History,the Historical Journal of Film, Radio and Television, the Journal of British Cinema and Television, Iluminace, Picture House, Premiere and Viewfinder.


Praise For Zulu - With Some Guts Behind It - The Making of the Epic Movie: EXPANDED AND REVISED 50TH ANNIVERSARY EDITION…

"This book is a magnificent achievement. Exhaustively researched, zestfully written and scrupulously scholarly, it is a fitting tribute to one of the greatest historical action films ever produced. …It is a joy to see a book so lovingly crafted, beautifully produced and handsomely illustrated." — Jeffrey Richards, Professor of Cultural History, Lancaster University

"...the #1 film book of the year. No reader of Cinema Retro will want to be without this volume on their bookshelf." — Lee Pfeiffer, Cinema Retro

"A class act from first page to last… the author truly does the movie proud in his fastidious coverage, which is exhaustive throughout. A joy to read; movie books really don’t come much better than this!" — Howard Maxford, Film Review

"Zulu has been the door through which many entered the Anglo-Zulu War...Sheldon has opened another door into the film-maker’s world...for which the film’s devotees should be equally grateful.’ — Peter Weedon, rorkesdriftvc.com

"It is possible to dip into any page and find yourself totally engrossed in what you find... You’ll be delighted, amazed, intrigued but never ever bored!" — Roger Morgan, The Assegai

‘‘The epic book about the epic movie’ roars the blurb – but for once the hype matches the material... Quite literally everything you ever wanted to know about the 1964 classic." — Quentin Falk, Academy Magazine

"...arguably the best book ever written on the making of a feature film." — Tony Earnshaw, tonyearnshaw.com

"Sheldon Hall, an avid devotee of the film, has created a book that seems almost as much a labor of love as the film itself was... a considerable work of scholarship." — Christopher Sharrett, Cineaste

"No question, this is an amazing piece of research ... longtime Zulu fans (like myself) will be enthralled by Hall’s meticulous work.’ — Steven Puchalski, Shock Cinema