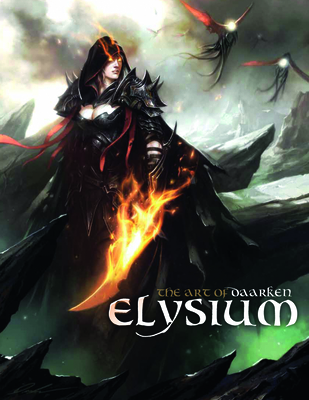 Take a trip through Daarken's mind as you travel from epic fantasy to contemporary beauty in Elysium--The Art of Daarken, the culmination of the past four years of this freelance artist's work in the gaming industry. This exciting journey covers a selection of personal illustrations and private commissions, as well as previously unseen pieces for world-famous franchises such as Magic: The Gathering (Wizards of the Coast) and World of Warcraft (Blizzard). Mike "Daarken" Lim began working professionally in 2004 and has worked for clients like Wizards of the Coast, Blizzard, Honda, Electronics, Fantasy Flight Games, Kabam, and BreakAway Games.

Praise For Elysium: The Art of Daarken…

Mike Daarken Lim graduated Cum Laude from the Academy of Art University in San Francisco back in 2004 with a BFA in traditional illustration. Daarken began working professionally in 2004 and has worked for clients like Wizards of the Coast, Blizzard, Honda, EA, Fantasy Flight Games, Kabam, Trion, Big Huge Games, Widescreen Games, Digital Extremes and BreakAway Games. Some of his projects include Magic: The Gathering, the World of Warcraft TCG, Rift, Kingdoms of Amalur, Warhammer Online, concepts for the 2012 Honda Civic commercial and various other incarnations of the Warhammer IP. Daarken specialises in traditional media (oils, watercolor, acrylics), Photoshop, After Effects, HTML, Flash, Google SketchUp, BodyPaint, Illustrator, Painter, and Camtasia. In 2003 his work was selected for his school's annual Spring Show, and in 2004 he won 1st place in Advanced Art Elective. In 2009 Daarken's painting Poised was chosen to hang in the Museum of American Illustration in New York for the Spectrum Annual Exhibition. He has also been featured in Spectrum 12-18.
Loading...
or
Not Currently Available for Direct Purchase