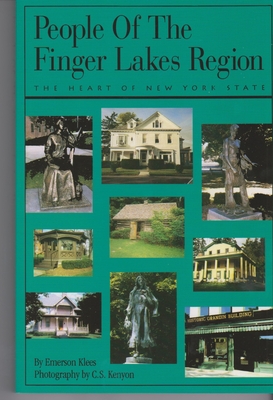 People of the Finger Lakes Region

This book is a collection of biographical sketches of 60 people from the Finger Lakes Region who either were born in the region, such as Thomas Watson of IBM; spent some of their formative years there, such as John D. Rockefeller: or distinguished themselves while living in the region, such as Susan B. Anthony. There are ten sketches in each of six area of endeavor.

Emerson Klees is the editor / publisher of Cameo Press. He is also the author of thirty books, half about New York State and the Finger Lakes Region and half collective biographies of role models of human values, such as perseverance, motivation, determination, resilience, and creativity.  He has a B.S. in electrical engineering, Penn State University, major: electronics, a M.B.A. from New York University, major: management, minor: statistics, and a M.A. in English literature (creative writing track) from the State University of New York at Brockport. For six years, he was an adjunct professor at the Rochester Institute of Technology College of Business teaching courses in entrepreneurship and business organization.