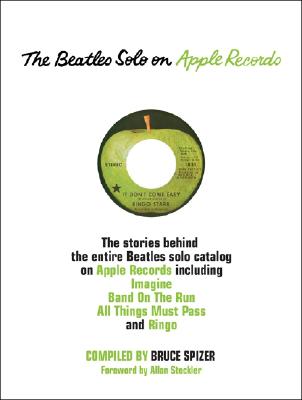 The Beatles Solo on Apple Records details the solo records released by John, Paul, George and Ringo on their own Apple label in America from 1968 through 1975. It tells the stories behind classic solo albums such as Imagine, Band On The Run, All Things Must Pass and Ringo. All solo projects are covered in matriclous detail, including all of the albums and singles released by John & Yoko and Paul McCartney & Wings. The book provides complete session and chart information and shows all picture sleeves, album covers and label variations, along with many of the promotional posters, displays and trade magazine ads. The book is hard cover and printed on heavy weight glossy paper. It has over 900 images (all in full color or original black & white) spread throughout the book's 358 pages. The book is the followup to the critically acclaimed The Beatles on Apple Records, which covered the records released by the group from 1968 through 1970 and is still available from Midpoint.

Bruce Spizer has written eight critically acclaimed Beatles books, including The Beatles Records on Vee-Jay, The Beatles' Story on Capitol Records, The Beatles on Apple Records, Beatles for Sale on Parlophone Records and The Beatles Are Coming! The Birth of Beatlemania in America. He has appeared on several national television programs (ABC's Good Morning America and Nightline, CBS's Early Show, CNN and Fox National News) and radio programs (NPR, ABC, BBC) as a Beatles expert and has given presentations at the Grammy Museum, the Rock 'N' Roll Hall of Fame and Museum, the American Film Institute, the Paley Center for Media, the Newseum, New York's Lincoln Center and Beatles conventions throughout the United States and in Liverpool, England. Bruce serves a consultant for Universal Music Group, Capitol records and Apple Corps, Ltd. on Beatles projects.