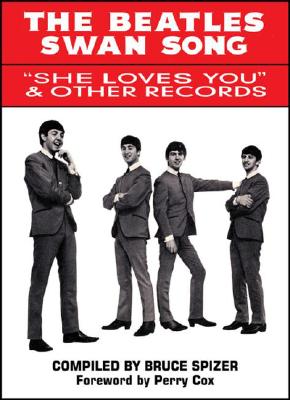 She Loves You & Other Records

The Beatles Swan Song is the sixth and final installment in Bruce Spizer's critically accliamined books on the Beatles American records. It tells the fascinating stories behind the records released by companies that had the rights to only a limited number of Beatles recordings. These labels included Swan, United Artists, Decca, MGM, Atco and Polydor, each trying to exploit Beatlemania to the fullest, often milking a cash cow even when they had no legitimate cow to milk. The book also covers the singles and albums released by Capitol Records in the 70s and 80s, including theme albums such as Rock 'N' Roll Music and Love Songs, as well as The Beatles At The Hollywood Bowl, Rarities and the unreleased Sessions LP. The book is printed on high quality glossy paper, with nearly 1,000 color images throughout.

Bruce Spizer has written eight critically acclaimed Beatles books, including The Beatles Records on Vee-Jay, The Beatles' Story on Capitol Records, The Beatles on Apple Records, Beatles for Sale on Parlophone Records and The Beatles Are Coming! The Birth of Beatlemania in America. He has appeared on several national television programs (ABC's Good Morning America and Nightline, CBS's Early Show, CNN and Fox National News) and radio programs (NPR, ABC, BBC) as a Beatles expert and has given presentations at the Grammy Museum, the Rock 'N' Roll Hall of Fame and Museum, the American Film Institute, the Paley Center for Media, the Newseum, New York's Lincoln Center and Beatles conventions throughout the United States and in Liverpool, England. Bruce serves a consultant for Universal Music Group, Capitol records and Apple Corps, Ltd. on Beatles projects.