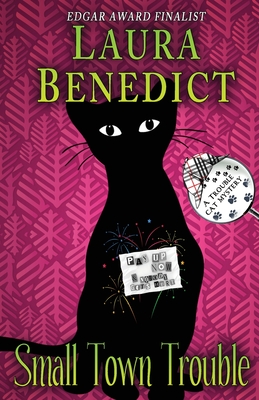 SUMMER SECRETS...KIDNAPPING AND MURDER. Erin Walsh arrives home to tiny New Belford, Kentucky from college only to clash with her young stepmother, Shelby Rae. When Shelby Rae is kidnapped and a dear friend of the family is murdered, Erin discovers that both victims had secrets connected to the violent death of her mother seven years earlier. In a small town the pool of suspects is limited, but it also means the danger to Erin's own life is deathly close.Noah Daly, an old high school friend, is the son of the man everyone blames for the violent death of Erin's mother. But he's also the one person Erin feels she can trust to help her find Shelby Rae's kidnapper and her friend's murderer. Or is her sudden attraction to him blinding her to his true nature?Enter Trouble, the wise and wily black cat detective. His paws have barely landed in the bluegrass when he realizes Erin is about to put herself in danger. Can he lead Erin to the truth before she becomes a victim herself?

Laura Benedict is the Edgar- and ITW Thriller Award- nominated author of seven novels of suspense, including the forthcoming The Stranger Inside (February 2019). Her Bliss House gothic trilogy includes: The Abandoned Heart, Charlotte's Story (Booklist starred review), and Bliss House. Laura's short fiction has appeared in Ellery Queen's Mystery Magazine, and in numerous anthologies like Thrillers: 100 Must-Reads, The Lineup: 20 Provocative Women Writers, and St. Louis Noir. A native of Cincinnati, she lives in Southern Illinois with her family.
Loading...
or support indie stores by buying on