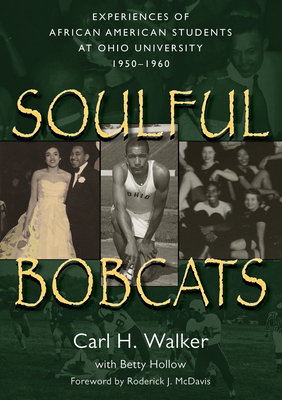 During the 1950s, when less than 20 percent of American high school graduates attended college, a group of ambitious young African Americans enrolled at Ohio University, a predominantly white school in Athens, Ohio. Because they were a tiny, barely tolerated minority, they banded together, supported each other, and formed lasting bonds. Years later, at a series of “Soulful Reunions,” they recalled the joys and challenges of living on a white campus before the civil rights era, and eighteen of them decided to share their stories.

The authors of the eighteen autobiographical sketches in Soulful Bobcats were a diverse group. They were athletes, rhetoricians, musicians, and actresses; they aspired to professions in the military, business, education, government, architecture, and the arts. Some grew up in poor families, while others enjoyed the comforts of the middle class. But they had several things in common. They all came from families that believed education was important. They had been taught to avoid trouble, to persist despite setbacks, and to expect to encounter prejudice and even discrimination.

The authors vividly describe instances in which they were humiliated—by other students, by professors, or by townspeople—as well as the few occasions when violence seemed inevitable. In addition, they describe their “first,” including becoming the first African American students at Ohio University to be awarded scholarships for their prowess in football, basketball, track, and tennis; the first to compete for titles such as “Mr. Fraternity” or “Queen of the Military Ball”; the first to appear in theatrical performances alongside their white schoolmates. They also tell of their success in providing a social life for themselves by organizing two Greek letter fraternities and one sorority, holding their own off-campus dances, and joining the few campus organizations that were open to them. Above all, their stories speak to a resilience that allowed these “Soulful Bobcats” to learn from their experiences at Ohio University, to engage in meaningful careers, and to lead rich, fulfilling lives.

An avid reader and local history buff, Betty Hollow has been on the staff at Ohio University since 1975. She enjoys both small-town life and the liveliness of the busy campus.

“Soulful Bobcats… is a valuable, highly readable collection of oral histories from African-American students during the postwar years…. (It) should be on every Bobcat’s shelf. Indeed, it should be of interest to all who care about the history of African Americans in higher education.”—Ohio Today

“Soulful Bobcats makes clear that while OU was making progress against institutional racism in the years after World War II, it still had a long road to travel…. While it's clear that being treated as second-class citizens or worse was infuriating and demeaning, the Soulful Bobcats' memories are sometimes funny, sometimes rueful, and relentlessly upbeat. They patiently fielded questions from curious white classmates about what it's like to be black, and took insults from professors as a spur to do even better in class. Most of all, they relied on each other.”—The Athens News

“Thank you for Soulful Bobcats. Like found treasure, it captures a valuable glimpse into the decade of black Bobcats who set the stage for my own generation's adventures in Athens. As I thumb through its pages I am constantly reminded of how much we stood on their shoulders in order to get to where we are now.”—Clarence Page, OU Class of ‘69, Pulitzer Prize-winning columnist for the Chicago Tribune
or support indie stores by buying on
Copyright © 2020 American Booksellers Association