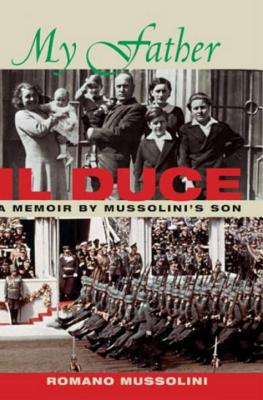 A Memoir by Mussolini's Son

Breaking a lifelong silence, the last surviving child of Benito Mussolini opens the floodgates about his father.

In this historical, revisionist memoir, Romano Mussolini (September 26, 1927-February 3, 2006), the last surviving child of dictator Benito Mussolini, contributes his unique perspective to the growing body of work that portrays Il Duce's era. Through Romano's portrait of never before publicly shared memories and feelings, My Father Il Duce brings alive the domestic scenes of his childhood particularly when they intersected with his father's public role. He also relates in detail the memories of his mother, Donna Rachele, who lived until 1979 and often spoke with Romano about his father.

Romano's memories, sorted by chapter, but not presented chronologically, shift between his own recollections of time spent with his father to the years after Mussolini's death in 1945. The prose lingers and then artistically moves forward, melancholy to fierce to vulnerable, like the notes of the jazz music played by Romano during his acclaimed musical career. Mussolini is presented here as a man who was supremely convinced that he was the master of his life: "'Everything happening around me,'" my father used to say, "'leaves me indifferent. I consciously choose 'Live dangerously' as my life's motto. As an old soldier, I say, 'If I advance, follow me. If I retreat, kill me. If they kill me, vindicate me.'" He saw his existence in scenes of high drama, envisioning in the end, Romano tells us, that he would be placed in front of throngs at New York City's Madison Square Garden and then executed in a macabre spectacle.

In this memoir, Romano does not truly ponder the consequences of his father's alliances and dictatorship, though with at least one notable exception that he gave considerable thought to his personal anger toward Hitler for "stabbing my father in the back at his darkest hour." Instead, he seeks to render concrete the memories that he held silent over a lifetime before they were lost to history. The fascist order that Mussolini created and imposed upon Italy is one that Italians and students of history the world over are still interpreting. Indeed, his legacy was centerstage in the May 2006 Italian national elections, and one of the deputies in the Italian parliament today who represents his alliances is Alessandra Mussolini, Romano's daughter and defender of her infamous grandfather. As the trend of historical revisionism in Italy continues, in particular regarding the role of fascism, some of this kinder, gentler Mussolini is already widely accepted.

Thus, My Father Il Duce (in Italian Il Duce Mio Padre) was published to great attention and controversy in Italy in 2004 and quickly became a bestseller. Romano often appeared on Italian national television and in newspaper interviews. In part, this illuminates that fascist supporters are alive and well, while also confirms even among non-supporters, the ongoing attraction to the cult of personality Mussolini masterminded. In Italy, this public discourse about Mussolini is common. However, for others it is important to establish a context for Romano's memoir. This is accomplished here through an accompanying masterful twenty-one page introductory essay by one of the world's foremost authorities on Italian political culture, Alexander Stille: writing the introductory essay to My Father Il Duce is a bit like writing the warning label on a powerful drug that has its uses but must be taken with care and knowledge of its possible side effects.

Romano reached his goal of living to see the first publication of his memoir in Italian. As for this English-language edition, he earlier expressed approval of the front cover design. On January 1, 2006, he received the translated English language manuscript of his writing. During the last month of his life, he approved it. Romano Mussolini died on February 3, 2006, at age seventy-nine in a Rome hospital soon after heart surgery. Romano's death made international news. The New York Times obituary reported: "In the 1950's and 60's he was in the vanguard of Italian jazz with his group the Romano Mussolini All Stars, and he played with American greats like Dizzy Gillespie, Duke Ellington and Chet Baker. Mr. Mussolini gained even greater international fame with his first marriage, to Anna Maria Scicolone, the sister of the actress Sophia Loren....Despite his own scrupulous avoidance of politics, politicians from Italy's right wing-parties widely lauded Mr. Mussolini and his family name in statements they released: 'Romano knew how to make us love him for his humanity, his art, but also for the dignity and coherence with which he defended his family from attacks and demonizations.'"

Through Romano's worldwide celebrity and well-regarded nature, his words in defense of Il Duce, albeit ones he no doubt wrote as a son who loved his father, offer a rare insider's perspective that can help us better understand, and therefore more readily defeat tyranny. This memoir's account of history further reminds us of the continuing need for our vigilance in the pursuit of truth.

Romano Mussolini, born in Italy on September 26, 1927 went on to become a distinguished jazz musician, recording ten albums. He collaborated with some of the greatest jazz artists of all time including Lionel Hampton, Dizzy Gillespie, and Tony Scott. After World War II, the self-taught musician had faced a bitter struggle to assimilate back into society. In Rome, he said he sold chickens to survive. His surname was cursed and for a while he performed music under the stage name Romano Full. Eventually, he resumed his identity as Romano Mussolini in the 1960s when his All Stars ensemble won critical acclaim. His whole life he refrained from discussing his father's legacy until publishing this memoir in Italian at age seventy-seven in 2004 "before it was too late." His first marriage was in 1962 to Maria Sciccolone, a jazz singer and younger sister of famed actress Sophia Loren. The couple had two daughters, Elisabetta and Alessandra, though ultimately divorced after years of marital estrangement. In 1990 Romano married the actress Carla Puccini, with whom he had a daughter Rachele. He lived in Rome until his death on February 3, 2006.

Alexander Stille is the acclaimed author of Benevolence and Betrayal: Five Italian Jewish Families under Fascism; Excellent Cadavers: The Mafia and the Death of the First Italian Republic; The Future of the Past; and The Sack of Rome: How a Beautiful European Country with a Fabled History and a Storied Culture Was Taken Over by a Man Named Silvio Berlusconi. He is a regular contributor to The New York Times and to one of Italy's most influential newspapers La Repubblica, as well as to Atlantic Monthly, The New Yorker, and U.S. News & World Report.
or
Not Currently Available for Direct Purchase
Copyright © 2020 American Booksellers Association