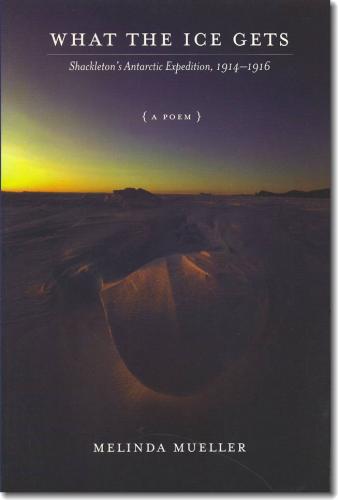 What the Ice Gets (Paperback)

Poetry. History. Travel. Blending historical, scientific, and literary scholarship with an impressive range of poetic forms, Seattle poet Melinda Mueller re-creates one of the most astounding survival stories. WHAT THE ICE GETS is an adventure story, a requiem, and a love poem written to twenty-eight heroes and the mythic landscape they set out to explore but that instead explored them. Both passionate and precise, this is a moving and powerful telling of one of the last century's greatest voyages. The ice has found a worthy poet -- Andrea Barrett. The whole poem is gripping to the end -- Booklist (starred review).

MELINDA MUELLER has published three previous collections of poetry. Her poems have been included in the Pushcart Prize XX and Best American Poetry 1990 anthologies and many literary journals. Born in Helena, Montana, she now lives in Seattle, where she teaches high school biology at Seattle Academy.
or
Not Currently Available for Direct Purchase
Copyright © 2020 American Booksellers Association