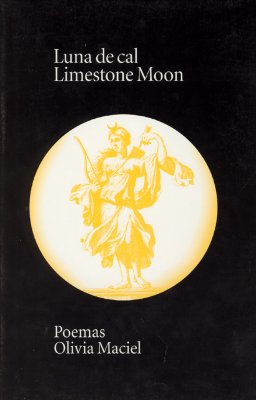 In Limestone Moon Olivia Maciel interrogates the inexpressible. Metaphor reaches into a realm of light and darkness to mysteriously converse with the silence enveloping the word. The tinging of this dark light which transcends borders, reveals a vehement and genuine interior, impregnated by the seed of the dream. With almost religious intensity, the poems yield a rare fruit, whose taste evokes the ineffable.

“Beautiful poems. . . . The rapid semantic lancing of ‘Sebastián’ weaves together a beautiful web of concepts. And let’s not forget ‘The Bagpiper,’ with its airy volatile ending, nor ‘Nocturnal Delight’ with its sufi-like flavor.”

Olivia Maciel resides in Chicago, where she is a lecturer in Spanish and Latin American literature at the University of Illinois at Chicago. She is the author of Más salado que dulce / Saltier than Sweet, Luna de cal / Limestone Moon, and Filigrana encendida / Filigree of Light, as well as editor of the poetry anthology Astillas de luz / Shards of Light. She is the recipient of the José Martí Literary Award and most recently of ForeWord’s Magazine Silver Award for Filigree of Light in 2002. Kelly Austin is assistant professor of Spanish literature at the University of Chicago.
Loading...
or
Not Currently Available for Direct Purchase