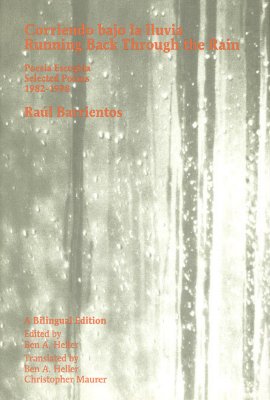 Corriendo bajo la lluvia / Running Back Through the Rain

Born in the south of Chile, but living and writing in the U.S. for the past thirty years, Raúl Barrientos eludes the easy categories: Latin American, Latino, American. All of these, and more. Yet always a poet, turning whatever he touches into startling imagery and gritty, enduring verse. These poems trace a trajectory from the 1973 coup d'etat in Chile to a difficult end-of-millennium in Manhattan. They give the reader a privileged view of a long and continually productive career in poetry—and a glimpse of the life behind it.

"It is easy to sense the incantatory, nightmarish linguistic fire. . . . The publication of [Corriendo bajo la lluvia] is an occasion for optimism in terms of restoring lost dialogues and creating new ones at a time when, more than ever, perhaps, one can appreciate the therapeutic value of the poetic word as it joins readers from different generations and places in its secret, mycelial life."
— Steven F. White

Raúl Barrientos (1942-2012) was born in Puerto Montt, a small town in the south of Chile. He studied at the Unversidad de Concepcion, where he later became professor of theater. After the 1973 military coup he left Chile for the United States and pursued advanced studies in Spanish-American literatures at the University of Pennsylvania and SUNY-Stony Brook.  He has published nine volumes of poetry.

Christopher Maurer is professor of Spanish at Boston University. He is editor and translator of Sebastian’s Arrows: Letters and Mementos of Salvador Dalí and Federico García Lorca, New Letters to a Young Poet by Joan Margarit, and The Complete Perfectionist by Juan Ramón Jiménez, all published by Swan Isle Press.