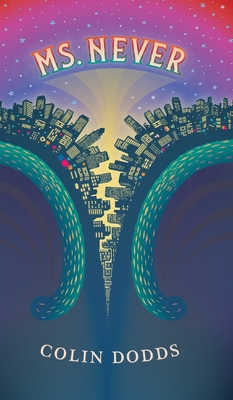 - What do we give away when we click "I AGREE" to the terms of service in our phones?
- Why are the billionaires squirrelling away all that money?
- Why do old photographs and songs refer to a history we can't remember?
- Why do professional sports teams need new stadiums so often?
- And why is everyone so depressed?
These are just a few mysteries that Ms. Never - a new science-fiction novel by Colin Dodds - takes on (and possibly solves) in startling fashion.

Farya Navurian seems like an ordinary young woman trying to get ahead in the city while struggling with depression. But her depression is anything but ordinary - it has the power to destroy time and space. Growing up the moody daughter of a space-faring hero of The Greater Anointed Imperial Ohioan Commonwealth, Farya annihilated most of that world and its history, leaving behind the husk-like Buckeye State.
One day at a record swap, she meets Bryan, a divorced telecom CEO. More than record collecting, what they share is that they each carry a howling secret. Bryan's business is a cover for a bigger operation that buys human souls and sells luxury afterlives using shady terms of service in mobile-phone contracts.
The two of them fall in love, and as they start a life together, their secrets back them into a corner where they have to come clean - and take drastic steps - to save themselves, and possibly reality itself.
Ms. Never is a distinctly 21st-century vision of consent, memory, and the ways we create and destroy the world every day.


REVIEWS
"Ms. Never is a big-picture novel, which encompasses the nature of reality, the universe, and life after death... a crazy world, but even the craziest parts of it have a ring of truth to them... Dodds' prose is exquisite... Farya's battle is the battle we all face: to impose a meaning on a world we only partially understand by fighting to retain what is worthwhile and battling against those people and events that cheapen everything around us... Ms. Never is a soaring novel, an imaginative, creative triumph and one that has some power to change the reader."
- Lost Coast Review