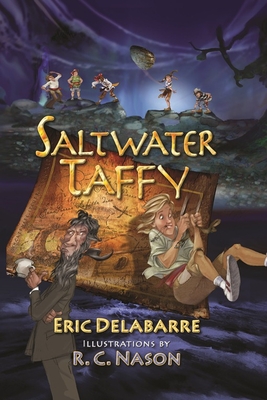 Endorsed by Teachers of the Year around the country, Eric DelaBarre's Saltwater Taffy follows the lives of five friends as they uncover a treasure map that once belonged to the ruthless New Orleans pirate, Jean Lafitte. The discovery thrusts them from one treasure hunting adventure to the next as they try to out-wit, out-think and out-maneuver everyone from the one-legged junk-yard man and an overbearing town bully, to the creepy old man living at the top of the hill. Saltwater Taffy is a raceto-the-finish adventure that grabs the reader and never lets go.

Eric DelaBarre is an award winning filmmaker, speaker, and most recently, a ghostwriter for Random House/Harmony Books. Eric began his career with Dick Wolf on NBC's mega-hit drama Law & Order, and has worked with 20th Century Fox, Samuel Goldwyn Films, Universal Studios and Lions Gate Films. His work has been sold around the world and showcased on HBO, Cinemax, Showtime, Starz/Encore, USA Network, and NBC. Eric is also the past-president of the Boys & Girls Club of Santa Monica Council. R.C. Nason, a professional artist for more than 20 years, is the recipient of the Hans Christian Anderson Award for Thumbelina. He has worked with companies such as Harper Collins, Hallmark, 20th Century Fox and Sony, to name but a few.

TEACHERS OF THE YEAR AGREE!

A perfect read for the summer. A wonderful, fun-filled adventure for all ages!”

It is rare in this day and age to find a book delivering a powerful message to young people that is not only exciting to read, but uplifting and inspiring as well. Saltwater Taffy delivers!”

An intriguing adventure that both a fantasy-loving grandmother and her fifteen-year-old grandson can enjoy together.”

After reading the page-turning excitement of Saltwater Taffy, I couldn’t wait to recommend it to one of my best friends, my 9-year-old stepson, Flynt.

A wonderful book for reluctant readerspirates, treasure maps, and a coming of age story that perfectly captures the heroic struggles of adolescence. What’s not to love?”

Friendships, bad guys, and pirate treasure - what more could a young reader want! Readers will enjoy Saltwater Taffy so much, they won’t even realize they are learning some great life lessons.”

Packed with adventure and intrigue, this story is about a treasure hunt that leads to one of the most important discoveries of all what really matters in life. It is a journey about self-discovery, friendships and transformations.”

Saltwater Taffy awakens the true spirit of adventure in each of us.”

Saltwater Taffy is a pure joy to read and explore. It feels like a field trip to Treasure Island with the Goonies. It’s a great inspirational adventure for young minds and those still young at heart.”

A fast-paced story that hooks’ readers from page one. Kids will find they want to turn the page to see what happens next rather than turn on the television. I loved it.”