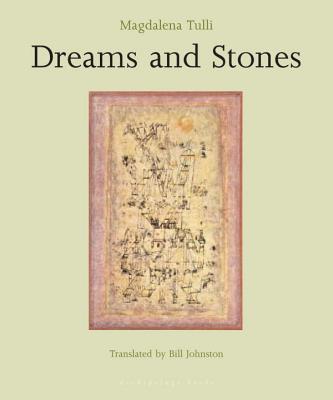 Dreams and Stones is a small masterpiece, one of the most extraordinary works of literature to come out of Central and Eastern Europe since the fall of communism. In sculpted, poetic prose reminiscent of Bruno Schulz, it tells the story of the emergence of a great city. In Tulli's hands myth, metaphor, history, and narrative are combined to magical effect. Dreams and Stones is about the growth of a city, and also about all cities; at the same time it is not about cities at all, but about how worlds are created, trans- formed, and lost through words alone. A stunning debut by one of Europe's finest new writers.

Praise For Dreams and Stones…

Powerful imagery caught in a sinewy, architectural, elegaic prose. A inner-outer dance of cityscape with the taut emotion, terror and psyche of the ‘human.’ Where are we? What magical zone of dream and stone? We are inhabitants of the wild, brilliant imagination of Magdalena Tulli. This book is great pleasure to read: deeply provoc- ative, intuitive, haunting. ‘I hunt among stones’ was Charles Olson’s probing line, a mission manifested here with full beauty and finesse. And rendered from Polish to English in an inspired translation by Bill Johnston. —Anne Waldman

Magdalena Tulli reveals herself to be the only true disciple of Bruno Schulz. —Jan Gondowicz, Nowe Ksiazki

Dreams and Stones, by the Polish writer Magdalena Tulli, is a postmodernist masterpiece of lyrical prose that defies generic definition and is rife with paradox and metaphor. —Kirsten Lodge, Slavic and East European Journal

A beautifully flowing translation. Johnston aptly captures the dreamy as well as the stark quality of the original. —Danuta Borchardt

Dreams and Stones is a startling, beautiful, powerful achievement. It calls the conventional genres of literature into question as its central image and metaphor, 'the tree of the world', grows, spreads and deepens. It does away with the persistent superstition of humanity's distinction from 'nature'. The originality of the writing is not lessened by representing a family tree that includes Michaud, Kafka, Calvino, and Saramago. It is a work to welcome and return to, and the translation is vibrant and graceful. —W.S. Merwin

Magdalena Tulli's other novels includeDreams and StonesandMoving Parts, nominated for the 2006 International IMPACDublin Literary Award; and Flaw shortlisted for the 2007 Nike Prize, Poland's most prestigious literary award. Tulli is also the translator of Proust and Calvino into Polish. She lives in Warsaw.

Bill Johnston is the Chair og the Comparative Literature Department at Indiana University. His translations include Wies?aw My?liwskicentss Stone Upon Stone, and Magdalens Tullicentss Moving Parts, Flaw and In Red. His 2008 translation of Tadeusz Ro?ewiczcentss new poems won the inaugural Found in Translation Prize and was shortlisted for the National Book Critics Circle Poetry Awa
or
Not Currently Available for Direct Purchase