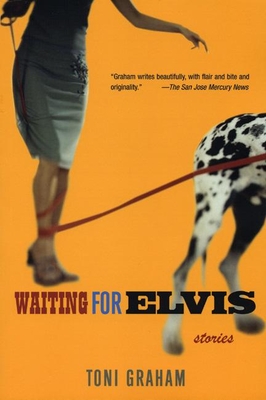 Zany, over-the-top and sexy, while achingly poignant and real, Waiting for Elvis is the bitingly funny follow-up to Toni Graham's award winning collection The Daiquiri Girls. In 11 darkly comic, interconnected stories that read as seamlessly as a novel, Graham exposes the hilarious side of loneliness and introduces Jane, the most beguiling single woman since Bridget Jones. Nearing 50, Jane is a San Francisco psychotherapist-turned-dog walker, a wild woman in an ever-changing body. She hasn't had a lover since Lars, the unfaithful, hedonistic love of her life, was decapitated in a car accident after a New Year's Eve quarrel. But grief be damned With equal parts alcohol and attitude, Jane lurches after all life has to offer-ever reminded that meeting the right man is as likely as a proposal from a dead Elvis.Remarkable . . . Graham takes characters who could easily become dreary stereotypes-and fleshes them out beautifully. Graham doesn't wallow in these women's vulnerability, but she doesn't apologize for it either. She uses their loneliness and confusion as backdrops for the action, not as personality traits. And her prose is entertaining without being forced: Graham allows a good deal of brainy good humor to flow naturally.-The New York Times Book ReviewToni Graham's stories are as intimate, intelligent and intensely 'feminine' as those of Jane Bowles or Jean Rhys. Her work is full of heart, smarts, honesty and a wickedness that is uniquely her own. Classy stuff from a very cool writer.-Molly GilesToni Graham is a native of San Francisco, currently an assistant professor at Oklahoma State University. Her first book, The Daiquiri Girls (University of Massachusetts) was the winner of the Associated Writing Programs Award for Short Fiction. Among many magazines, her stories have appeared in Other Voices, Writers Forum and Playgirl.

Toni Graham is a native of San Franciso, currently an Assistant Professor of English at Oklahoma State University. Her first book, 'The Daiquiri Girls' (UMass/1998) was the winner of the Associated Writing Programs Award for Short Fiction. Co-editor of Fiction for "The Cimarron Review," her stories are published in many literary and popular American magazines, including 'Playgirl.'
or
Buy Here
Copyright © 2020 American Booksellers Association