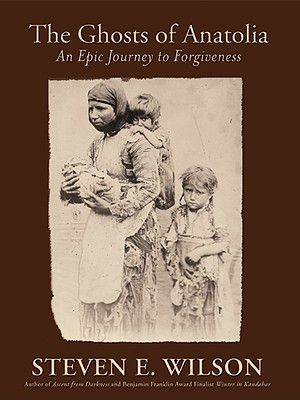 The Ghosts of Anatolia

An Epic Journey to Forgiveness

The Ghosts of Anatolia is an epic tale of three families, one Armenian and two Turkish, inescapably entwined in a saga of tragedy, hope, and reconciliation. Beginning in 1914, at the start of the the Great War, confident Ottoman forces suffered a devastating defeat at the hands of the Russians. Pursuing Russian forces drove deep into eastern Anatolia, and the ensuing conflagration, fanned by fear, mistrust, and sedition, engulfed the Ottoman Empire. What happened there is contentiously debated, and to this day remains a festering sore of division. This compelling adventure novel brings these events poignantly to life.

Praise For The Ghosts of Anatolia: An Epic Journey to Forgiveness…

The Ghosts of Anatolia takes us on a realistic journey into a dark period of genocidal history. My own family endured the horrors on the road to Ras ul-Ain. After reading this gripping novel, I now feel as if I was with them.
Armand Arabian, Associate Justice, California Supreme Court (retired)

I was utterly transported to another place and time by Steven Wilson's Ghosts of Anatolia. The plot was engaging and the characters endearing. Wilson's generation- and continent-spanning tale is full of love and hardship, war and family, history and mystery. In Ghosts of Anatolia, we follow the extraordinary and complicated character Sirak Kazerian, from his childhood in Anatolia at the dawning of the 20th century, through his education in Jerusalem, to his later life in America. Sirak learns that, though he has fled thousands of miles, he cannot escape his past--the “ghosts” of Anatolia emerge in ways no reader will expect. Wilson's story is a tapestry of contradictions: of boundary-crossing friendships amid religious conflict, of love and letting-go, of feud and forgiveness, and of the boundless power of faith to heal.
LaVon Kellner, President of Ethis Communications