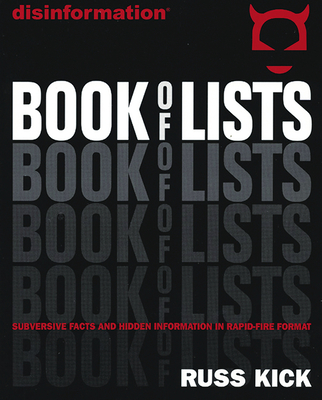 In 1977, David Wallechinsky, Irving Wallace and Amy Wallace published The Book of Lists, causing an immediate sensation. Not only did it lead to three direct sequels (in 1980, 1983 and 1993), it also created a new genre. Soon, shelves were lined with The First Original Unexpurgated Authentic Canadian Book of Lists (1978), The Book of Sports Lists (1979) and Meredith's Book of Bible Lists (1980), among many others. Using this popular, enduring format, Russ Kick's Disinformation Book of Lists delves into the murkier aspects of politics, current events, business, history, science, art and literature, sex, drugs, death and more. Despite such unusual subject matter, this book presents hard, substantiated facts with full references.

Among the lists presented:

Russ Kick is the editor of the wildly successful three-volume anthology The Graphic Canon: The World's Great Literature as Comics and Visuals and the bestselling anthologies You Are Being Lied To, Everything You Know is Wrong, and 50 Things You're Not Supposed to Know . His books have sold over half a million copies. The New York Times has dubbed him "an information archaeologist," Details magazine described him as "a Renaissance man," and Utne Reader named him one of its "50 Visionaries Who Are Changing Your World." He is creator of the popular website www.thememoryhole.com.