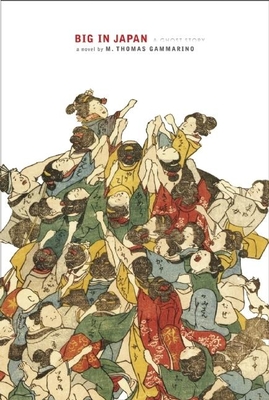 "From Susie Wong to Madame Butterfly to Miss Saigon: you might think that we've had enough of American men adventuring, scoring, and coming undone in the Far East. But you'd be wrong. Gammarino's Big in Japan is a shrewd and lively book, sharp-eyed and unsparing in its account of a young American's good and very bad moments overseas. The writing is wired and the ultimate judgement is merciless. It's seductive and it's devastating." --PF Kluge, author of Eddie and the Cruisers and Gone Tomorrow

While playing to lackluster crowds in their hometown of Philadelphia, progressive rock band Agenbite clings to the comforting half-truth that they're doing better in Japan. When their manager agrees to send them over on a shoestring tour, though, they're swiftly forced to give up their illusions and return stateside. All but one of them, that is. Brain Tedesco, the band's obsessive-compulsive nerve center, has fallen in love with a part-time sex worker - the first woman ever to have touched him - and his illusions have only just begun. What ensues is a gritty coming-of-age tale in which Brain, intent on achieving some kind of transcendence, paradoxically (or not so paradoxically) descends into the Hungry Ghost realm of Tokyo's underworld. He becomes, in effect, a gaki - the insatiable creature of Buddhist cosmology - and must learn how to live even as his outsize desires threaten to engulf him. By turns compassionate and ruthless, erotic and grotesque, riotously serious and deadly funny, Big in Japan is a sparking, gut-wrenching, face-melting debut novel.

In Brain, Gammarino has created a perfect hero for the Age of Anxiety. Propelled by the author’s knack for both pitch-perfect dialogue and startling metaphors, the reader follows Brain on an ill-fated tour of the Land of the Rising Sun, where he loses his band but finds himself in slow, painful, hilarious fashion.” Ron Currie Jr., author of Everything Matters! and God is Dead.

This book will make you wonder if you've ever had sex. I mean ever really had sex, and if you haven't, should you? It's a book that takes on the big questions. Can desire be quenched? What is enlightenment? To find out you much become the brains of a rock band that goes sky high while you descend literally to the bowels of the Earth. Above all this is a serious book (by a terrific writer), painful, soulful, and at the same time one of the funniest books I've ever read. Gammarino is first rate.” Robert Shapard, editor of New Sudden Fiction: Short-Short Stories from America and Beyond

"Self- and sex-obsessed, Brain is an easy character to despise. It is to Gammarino's credit that we remain interested in him as he spirals downward" David Cozy, Japan Times

"Gammarino writes with the self-assurance and narrative voice of a well-seasoned (and well-traveled) professional." Danielle Dreger-Babbitt, Seattle Books Examiner

"Gammarino shows real promise as an author who can crack open the head of a warped individual and show us the rot inside." Paul Constant, The Stranger

M. Thomas Gammarino is the author of the novella "Jellyfish Dreams" (Amazon Kindle Single, 2012) and the novel "King of the Worlds" (coming from Chin Music Press April 2016). In 2013 he received the Elliot Cades Award for Literature. He lives and teaches in Honolulu with his wife and kids.