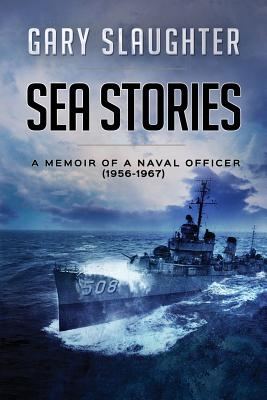 AT THE HEIGHT OF THE CUBAN MISSILE CRISIS, ENSIGN SLAUGHTER FOUND HIMSELF STARING EYE TO EYE WITH VITALI SAVITSKY, CAPTAIN OF A SOVIET SUBMARINE ARMED WITH A NUCLEAR TORPEDO.

On October 27, 1962, the USS Cony surfaced B-59, a Soviet submarine. Gary Slaughter, a 23-year-old US Navy Ensign, studied the sullen face of Captain Vitali Savitsky at a distance of only 200 feet. Slaughter, the only officer on Cony trained to communicate with the Russian Captain, had one objective: dissuade Savitsky from launching his torpedo tipped with a 15 kiloton nuclear device, which would have precipitated an all-out nuclear exchange that would have destroyed the world.

Sea Stories: Memoir of a Naval Officer (1956-1967) spans Slaughter's naval service during the Cold War. Over 60 vignettes depict the danger of Navy life over the course of his naval career, including not only the incident with the Soviet submarine, but also:

- a sailor who, after too many beers, jumps into icy waters off the coast of Portland, Maine

Finding humor and likability in the people and situations he encountered during his Navy career, Slaughter brings his experiences to life with the same writing skills found in his series of five award-winning Cottonwood novels set on the World War II home front.

"Slaughter is an undeniably talented writer, a master at describing lovable characters and an engaging story-telling narrative enriched with humor and originality." - Midwest Book Review

"Lieutenant Slaughter has served as my personal aide and the administrator of my organization, the Navy Board of Inspection and Survey, comprising over 300 naval officers and civilians. To perform this job well requires an officer having exceptional administrative and management ability. It further requires responsibility, tact, and a keen and astute mind. His military character is beyond reproach and his personal character is outstanding." - Vice Admiral John Bulkeley, one of the three most highly decorated heroes of World War II.