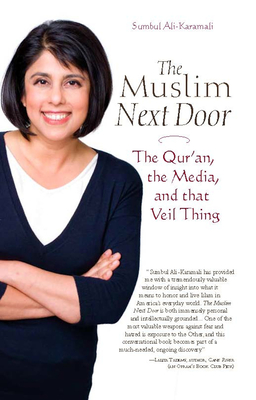 The Muslim Next Door

The Qur'an, the Media, and That Veil Thing

- Bronze Medal Winner of the Independent Publishers Award 2009 - Since 9/11, stories about Muslims and the Islamic world have flooded headlines, politics, and water-cooler conversations all across the country. And, although Americans hear about Islam on a daily basis, there remains no clear explanation of Islam or its people. The Muslim Next Door offers easy-to-understand yet academically sound answers to these questions while also dispelling commonly held misconceptions. Written from the point of view of an American Muslim, the book addresses what readers in the Western world are most curious about, beginning with the basics of Islam and how Muslims practice their religion before easing into more complicated issues like jihad, Islamic fundamentalism, and the status of women in Islam. Author Sumbul Ali-Karamali's vivid anecdotes about growing up Muslim and female in the West, along with her sensitive, scholarly overview of Islam, combine for a uniquely insightful look at the world's fastest growing religion.

Praise For The Muslim Next Door: The Qur'an, the Media, and That Veil Thing…

Post 9/11 has seen an explosion of publishing on Islam. For many, the question is who do I read if I only have a limited amount of time and want to know what and why Muslims believe what they believe? The Muslim Next Door is an excellent place to start. Sumbul Ali-Karamali presents Islam as a living and lived faith. She combines scholarship with an engaging and accessible style and frank self-criticism that crystallizes the faith and commitment of a majority of mainstream Muslims in its unity and diversity.”


"I wish I could send a copy of The Muslim Next Door not just to every Muslim extremist, including Bin Laden and his likes, but also to the President of the United States and his staff, to all policy makers, and also to every single Islamophobe or self-hating Muslim in the world. If they read and understood this book, most certainly our world would become a much better place to live. Since the terrorist attacks of 9/11, the publishing world has generated a virtual flood of books on Islam and Muslims, and the vast majority of what has been published is no better than pseudo-intellectual drivel. In my view, however, The Muslim Next Door is solid intellectual gold! This book easily ranks as one of the best three books published on the Islamic faith in the English language since the tragedy of 9/11. It is a profoundly eloquent, consistently reliable, comprehensive, insightful, and often brilliant testament of what it means to be a Muslim and what the religion of Islam is all about. Refreshing in its honesty, accessibility, and humility, and truly impressive in scope and depth, this is an indispensable book. Indeed this book is a necessary read not just for those who are interested in learning about Islam, but even more so for those who believe that they have learned all there is to know about Islam."


"There are few books that I would genuinely recommend to everybody I know, and you are holding one of them. Sumbul Ali-Karamali has written a lovely, lyrical and learned book about living Islam. Whether you are an expert in the subject or a novice, a skeptic or a believer, you will find this book a treasure."


"Sumbul Ali-Karamali has provided me with a tremendously valuable window of insight into what it means to honor and live Islam in America's everyday world. The Muslim Next Door is both immensely personal and intellectually grounded, and it presents an informed dialog I would not normally be privy to. One of the most valuable weapons against fear and hatred is exposure to the Other, and this conversational book becomes part of a much-needed, ongoing discovery."


"A beautiful book. At a time when most Americans are bombarded with misinformation about Islam and, in particular American Muslims, Ali-Karamali has written an elegant corrective a paean to the faith, practice, values, and beliefs of the world's second largest religious community. For anyone who truly wants to know what Muslims believe, this is the perfect book.”

Reza Aslan author "No god but God: The Origins, Evolution, and Future of Islam"


"Sumbul Ali-Karamali has produced an intelligent, sensitive and highly readable study of Islam as it is experienced and interpreted by most Muslims. An important work that does an excellent job contextualizing common misperceptions of Islam, as well as challenging the distorted views of the extremists and the prejudices of the Islamophobes."


Sumbul Ali Karamali has written a book which is gripping, comprehensive and essential. With wit, honesty, and scholarship, she offers an account of what being Muslim means in a polarised world where the faultline is as grave as it is prejudiced. A masterpiece of simplicity that offers a groundbreaking testimony that will find its way to every household, in the US and beyond, for Muslims and non-Muslims alike.”


"Sumbul Ali-Karamali has a gift for explaining the ins and outs of Islam in a language understandable by all. As a practicing Muslim, she puts a human face on a religion that is grossly misunderstood and often feared in America. I recommend this book to anyone who wants to learn more about Islam from someone who lives it"


"Sumbul Ali-Karamali lives according to her faith, with humor, good grace and brilliance, so when she shares her insights, they ring true. Her book is a classic you will remember because she has bared her soul. Sumbul mixes scholarly insight about Islam with a personal, well-considered perspective on being a mainstream American Muslim. She brings perspective to the words and customs of Islam. Sumbul's charming openness about family life, her honesty about her own questions, her simplicity about living practically, and her down-to earth view of reality make the book really worth reading. I was a Catholic nun in my early life, so took particular interest in this modern, savvy woman's faith, which was, to be frank, a little scary to me. This book is fascinating; I couldn't put it down. I recommend it whole-heartedly to people of good will who are grappling with questions about Islam and Muslim in America today."


"An engaging and enlightening work. The author has provided an indispensable vade mecum for anyone interested in a sensitive and feminist perspective on Islam, free of the rhetoric and exaggerations common in contemporary public discourse. The book is conversational in tone and very readable and, although the subject is serious, the author has a gift for applying a lighter touch and humor at just the right moments. It should be read by everyone.”


"Sumbul Ali-Karamali provides refreshing insight into an impressive range of issues concerning Islam. Her book is the journey of an American Muslim woman struggling with her identity, her tradition, and most importantly, her desire to simultaneously fit in with American culture while preserving her faith. Through the use of both personal anecdotes and extensive evidence from the Islamic tradition, she provides easy-to-read, credible, and thought-provoking analysis. Intended primarily for non-Muslims seeking to understand their Muslim neighbor, Muslims will also see much value in Ali-Karamali’s book."


"The Muslim Next Door provides a timely, candid and sensitive insight into the experience of growing up Muslim in a post-9/11 America, along with a much-needed and impeccably researched explanation of the historical and cultural contexts of today’s Muslim world and the religion of Islam. I look forward to my students making good use of this book in my undergraduate classes, and I look forward to its soon being read by a much wider and general audience of all ages in both this country and abroad.”

Sumbul Ali-Karamali grew up in California, balancing her South Asian, Muslim, and American identities. Often the only Muslim her acquaintances knew, she had ample practice answering questions about Islam and Muslims. (What do you mean you can't go to the prom because of your religion?) While working as a corporate lawyer, she was repeatedly asked to recommend books on Islam, so she decided to write a book that was both academically reliable and entertaining to read. Consequently, she moved to London and earned her L.L.M. in Islamic Law from the University of London's School of Oriental and African Studies. She served as a teaching assistant in Islamic Law at SOAS and a research associate at the Centre of Islamic and Middle Eastern Law in London, and then she wrote The Muslim Next Door for everyone who ever asked -- or wanted to ask -- a question about Islam.
Loading...
or
Not Currently Available for Direct Purchase