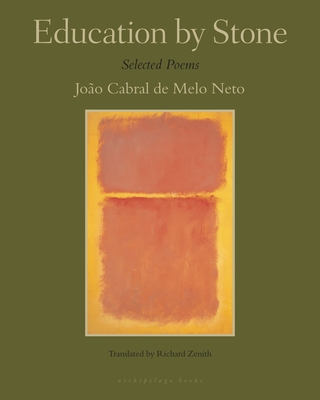 Imagine making poems the way an architect designs buildings or an engineer builds bridges. Such was the ambition of João Cabral de Melo Neto. Though a great admirer of the thing-rich poetries of Francis Ponge and of Marianne Moore, what interested him even more, as he remarked in his acceptance speech for the 1992 Neustadt International Prize for Literature, was "the exploration of the materiality of words," the "rigorous construction of (. . .) lucid objects of language." His poetry, hard as stone and light as air, is like no other.

Praise For Education by Stone…

The compressed wry clarities of this great poet find an active voice in these exceptionally perceptive translations. It matters that one understand "the original" beyond the seeming simplicity of its words. Richard Zenith does, altogether. —Robert Creeley

This superb selection of João Cabral de Melo Neto’s poems is indeed, in the words of the title, an "Education by Stone." Like Francis Ponge and William Carlos Williams, Cabral is a poet of thingness; he observes the seemingly trivial and intransigent, transforming "stone" into something rich, strange—and often very sexy. Richard Zenith’s excellent translation captures Cabral’s unique—and surprising—poetic landscape in all its nuances and thus provides new access to a major Brazilian poet. —Marjorie Perloff

João Cabral de Melo Neto is one of Brazil’s most acclaimed poets . . . From his early days, Mr. Cabral has written poems that are marked by a captivating use of simple language. Avoiding ceremony and circumstance, they follow centuries-old paths rather than struggle to break new ground. —NY Times Book Review

João Cabral de Melo Neto (1920–1999) was born and raised in northeastern Brazil, whose arid landscape and severe poverty became the setting and subject matter for some of his greatest poems. A career diplomat, he lived for many years in Spain, the other geographical pole around which his poetry flourished. Numerous national and international prizes were awarded to João Cabral, one of the most original poets of the 20th century.

Richard Zenith’s translations from the Portuguese include works by António Lobo Antunes and Fernando Pessoa. His Fernando Pessoa & Co.: Selected Poems won the 1999 PEN Award for Poetry in Translation, and his new version of Pessoa’s The Books of Disquiet (Penguin) was awarded the 2002 Calouste Gulbenkian Translation Prize. Zenith is the author of Terceiras Pessoas and has published his poetry in literary reviews. He lives in Lisbon.
or
Not Currently Available for Direct Purchase