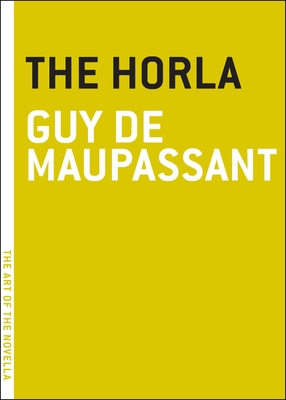 The Horla (The Art of the Novella)

Our woe is upon us.

This chilling tale of one man’s descent into madness was published shortly before the author was institutionalized for insanity, and so The Horla has inevitably been seen as informed by Guy de Maupassant’s mental illness. While such speculation is murky, it is clear that de Maupassant—hailed alongside Chekhov as father of the short story—was at the peak of his powers in this innovative precursor of first-person psychological fiction. Indeed, he worked for years on The Horla’s themes and form, first drafting it as “Letter from a Madman,” then telling it from a doctor’s point of view, before finally releasing the terrified protagonist to speak for himself in its devastating final version. In a brilliant new translation, all three versions appear here as a single volume for the first time.

Praise For The Horla (The Art of the Novella)…

Guy de Maupassant was born in Normandy in 1850. At 20 he served in the Franco-Prussian War, then studied writing with his mother’s friend Gustav Flaubert (perhaps believing rumors, which persist, that Flaubert was his father). In 1880 he published his first story, “Boule de Suif,” which was hailed as a masterpiece. He quit his civil service job and soon published the collection, La Maison Tellier. He would go on to publish 300 stories and six novels, including Bel-Ami and Pierre et Jean, while living the life of a bon vivant. In the late 1880s, however, he began to show signs of syphilitic mental illness, and in 1891, was institutionalized after a suicide attempt. He died in a mental asylum in 1893.

Charlotte Mandell has won the Modern Language Association Prize in translation. Among other titles she has translated for The Art of the Novella series are Marcel Proust's The Lemoine Affair, Guy de Maupassant's The Horla, and Gustave Flaubert’s A Simple Heart.
Loading...
or
Not Currently Available for Direct Purchase