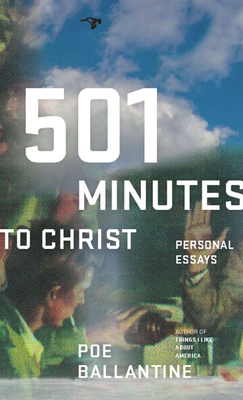 Poe Ballantine's second collection of personal essays follows, and expands on, his acclaimed Things I Like About America. Ballantine's world is a crazy quilt of odd jobs, eccentric characters, boarding houses, buses, and beer, rendered in the author's by turns absurd and poignant voice. "The Irving" briskly details the author's diabolic plan to punch John Irving in the nose after opening for him before an audience of 2,000 people at the prestigious Wordstock Festival. "Wide-Eyed in the Gaudy Shop" takes readers on a wild ride through Mexico as Ballantine meets and marries his wife Christina. "Blessed Meadows for Minor Poets" offers a devastating take on the author's life as his years of struggle to secure a major contract for a short story collection end in catastrophe. The writer the Seattle Times called "part Huck Finn, part Hunter S. Thompson" brings a blistering wit and shrewd observation to this composite portrait of an unconventional life.

Poe Ballantine currently lives in Chadron, Nebraska. His work has appeared in The Atlantic Monthly, The Sun, Kenyon Review, and The Coal City Review. In addition to garnering numerous Pushcart and O. Henry nominations, Mr. Ballantine's work has been included in the anthologies The Best American Short Stories 1998 and The Best American Essays 2006.
or
Not Currently Available for Direct Purchase
Copyright © 2020 American Booksellers Association