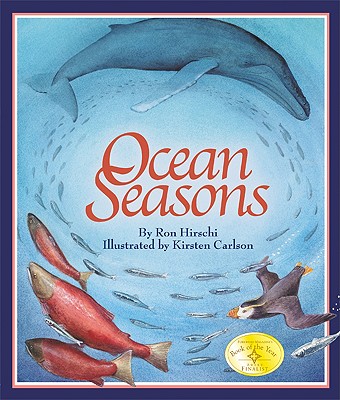 Seasons change in the ocean much as they do on land. Spring brings new plants and baby animals, summer oceans glow with sparkly plankton lights, and autumn winds blow across the open water. In winter the humpback whales migrate to warmer waters, just as some land animals move to warmer climates. The cycle begins again as they return to the northern waters in the spring. In fun, fanciful form, Ocean Seasons introduces plants and animals that are joined through the mix of seasons, food webs, and habitats beneath the waves. While set in the Pacific, similar changes occur in the Atlantic also. The -For Creative Minds- learning sections features and -Ocean Food Web Card Game.-

Kirsten Carlson is fascinated by animals and nature. Her background in biology, scientific illustration and design has given her the tools to share stories about the natural world through illustration. She believes illustrating children's books are a wonderful way to connect others to nature. Prior to illustrating Ocean Seasons, Kirsten illustrated The Giraffe Who Was Afraid of Heights, also published by Arbordale. Kirsten lives in Gig Harbor, Washington near the shores of Puget Sound. Visit Kirsten's website: http: //www.kirstencarlson.net/
or support indie stores by buying on
Copyright © 2020 American Booksellers Association