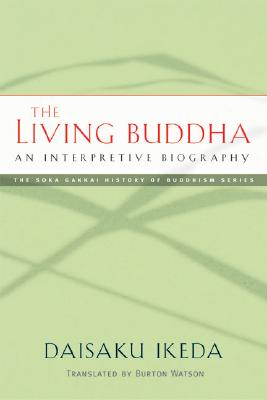 An intimate portrayal of one of history's most important and obscure figures, the Buddha, this chronicle reveals him not as a mystic, but a warm and engaged human being that was very much the product of his turbulent times. This biographical account traces the path of Siddhartha Gautama as he walked away from the pleasure palace that had been his home and joined a growing force of wandering monks, ultimately making his way towards enlightenment beneath the bodhi tree, and spending the next 45 years sharing his insights along the banks of the Ganges. The Buddhist canon is expertly harvested to provide insight into the Buddha's inner life and to grant a better understanding of how he came to play his pivotal role as founder of one of the world's largest religions.

Daisaku Ikeda is the author and coauthor of more than 60 books on Buddhism and the founding president and leader of the Soka Gakkai International, one of the largest lay Buddhist organizations in the world. He is the recipient of the United Nations Peace Award, the Rosa Parks Humanitarian Award, and the International Tolerance Award of the Simon Wiesenthal Center. Burton Watson is a translator of Chinese and Japanese literature. His translations include Chuang Tzu, The Lotus Sutra, Ryokan, Saigyo, and The Vimalakirti Sutra. He received the PEN Translation Prize in 1981.

Because of the limited known facts of the Buddha’s life, this book is subtitled “An Interpretive Biography” and the subtitle of the Japanese edition is subtitled “My view of Shakyamuni.” Did you find this personal interpretation successful? Does Daisaku Ikeda bring the Buddha to life? How does this biography differ from those based on first and secondhand sources, family and friend interviews, and other methods employed by biographers?

The biographer points out that Shakyamuni, Socrates, Confucius, and the prophet Isaiah were all alive at approximately the same time constituting the dawn of spiritual civilization. Discuss how each man contributed to that dawn. Have there been other eras when several great thinkers and leaders have been alive at the same time? If so, in what way did they influence the world in which they lived?

Deeply affected by the human tragedies he witnessed, Shakyamuni gave up his wealth and influence and refused remuneration and riches. How did this strengthen his appeal to his followers?

The Buddha sought deliverance from human sufferings in meditation hoping to gain emancipation from the sufferings inherent in human existence. Daisaku Ikeda differentiates between this concept of freedom within the individual and the Western understanding of the term, which, he states, is the search for emancipation for the rights of the individual within their society. Daisaku Ikeda theorizes that perhaps this difference has led the East to neglect the problems of society. Do you agree, and if so, in what areas do you think that this difference is most evident?

After his enlightenment, the Buddha spent the rest of his life teaching what he described as the Middle Way. Discuss what is meant by this.

Daisaku Ikeda states, “From the perspective of Buddhism, religion should not attempt to dictate social activity but should exert a spiritual influence over those who carry out this activity.” Do you agree? Have there been eras where this has not been the case?

The essential difference between Buddhism and most other religions is, in the words of Daisaku Ikeda, that “no religion places greater emphasis upon the dignity of the individual and one’s subjective nature than Buddhism. . . most religions recognize the ‘absolute’ as existing outside the self, Buddhism does not.” Discuss this difference between the major religions drawn by Daisaku Ikeda.

In what ways does this interpretive biography placing Shakyamuni, the Buddha, in his historical and geographical context lead to a deeper understanding of the Buddhist philosophy and legacy?

The fundamental spirit of Buddhism, as described by Daisaku Ikeda, strongly emphasizes practice, employing the active and positive rather than the merely passive. Discuss how the Buddha embodied this philosophy in his own life and encouraged it in his followers down to the present day.