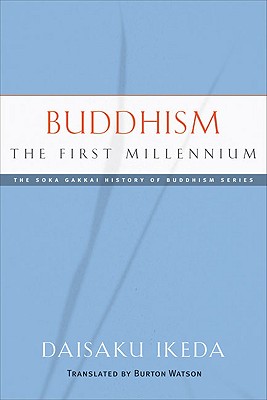 Beginning with the events immediately following the dark days after the death of Shakyamuni and continuing over a period of 1,000 years, this dynamic tome covers a vast and complex series of events and developments in the history of Buddhism. Through a thorough examination of its early development in India, a new light is cast on little-known aspects of Buddhist history and its relevance to the understanding of Buddhism today. Topics include the formation of the Buddhist canon, the cultural exchange between the East and West, and the spirit of the Lotus Sutra.

Daisaku Ikeda is the author and coauthor of more than 60 books on a wide range of topics, including the history of Buddhism and Buddhist philosophy. He is the founding president and leader of the Soka Gakkai International, one of the largest lay Buddhist organizations in the world with members in more than 190 countries and territories. He is the recipient of the United Nations Peace Award, the Rosa Parks Humanitarian Award, and the International Tolerance Award of the Simon Wiesenthal Center. Burton Watson is a translator of Chinese and Japanese literature. A former professor at Columbia, Stanford, and Kyoto Universities, his translations include Chuang Tzu: Basic Writings, The Lotus Sutra, and The Vimalakirti Sutra, among others. He received the PEN Translation Prize in 1981.

Buddhism, The First Millennium describes the spread of Buddhism in the centuries after the death of Shakyamuni. How did this religion flourish in its early years?

This book states that Shakyamuni left no writings to his disciples. Daisaku Ikeda describes how the basic principles and ideas of Buddhism were passed down through his followers, primarily by memory, word of mouth, and practice. Discuss how this is thought to have happened and how this compares to what you know of other religions.

This book describes a schism in Buddhist schools approximately one hundred years after the death of Shakyamuni. How did this affect the spread of Buddhism?

King Ashoka is presented as one of the most influential early Buddhist practitioners. How did his beliefs change the role of government? What was his legacy?

Discuss the importance of The Questions of King Milinda.

The author states that “Christianity and Buddhism are alike in preaching to all humankind a universal message about how one ought to live.” Discuss similarities and differences that you see between the Buddhist and Christian teachings.

The German philosopher Karl Jaspers wrote, “What the Buddha taught was not a system of epistemology but a way of salvation.” How did Mahayana Buddhism embody this in its writings five hundred years after the death of Shakyamuni?

Discuss the importance of the Lotus Sutra.

Nagarjuna has been called the second Buddha. How important are his writings to the spread of Buddhism to East Asia? Discuss his theory of non-substantiality.

The author states that Buddhism was never intended to be just a program of study. “The only way to understand Buddhism is through the experience and wisdom acquired through actual practice.” Is this true today?