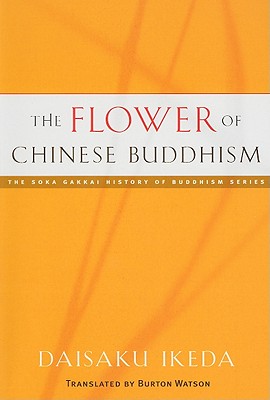 The Flower of Chinese Buddhism (Soka Gakkai History of Buddhism)

Beginning with the introduction of the religion into China, this chronicle depicts the evolution of Buddhism. The career and achievements of the great Kumarajiva are investigated, exploring the famed philosophical treatises that form the core of East Asian Buddhist literature. Providing a useful and accessible introduction to the influential Tien-t’ai school of Buddhism in Japan as well as the teachings of the 13th-century monk Nichiren, this examination places special emphasis on the faith of the Lotus Sutra and the major works of masters such as Hui-su, Chih-i, and Chanjan. From the early translations of the Buddhist scriptures to the persecution of the T'ang dynasty, this exploration illuminates the role of Buddhism in Chinese society, and by extension, in humanity in general.

Daisaku Ikeda is the president of the Soka Gakkai International and the founder of the Soka University of America. He is the author of For the Sake of Peace, Unlocking the Mysteries, and The Way of Youth. Burton Watson is a former professor at Columbia, Stanford, and Kyoto Universities. His translations include Chuang Tzu: Basic Writings, The Lotus Sutra, Mo Tzu: Basic Writings, Ryokan: Zen Monk-Poet of Japan, Saigyo: Poems of a Mountain Home, and The Vimalakirti Sutra.

The author, Daisaku Ikeda, maintains that many aspects of the Buddhist religion facilitated its spread to different civilizations. Discuss what makes Buddhism uniquely acceptable throughout the world.

What were the obstacles to the spread of Buddhism in China? How were these overcome?

Kumarajiva is held to be the most famous translator of the Buddhist scriptures. What were his particular strengths, and why was he more successful than those who preceded him?

In early China, Buddhism was split between the northern and southern schools. How did this happen? Was this schism resolved?

In the beginning, the Buddhist faith was carried to China by people traveling from west to east along the Silk Road. This book relates the stories of those Chinese thinkers who made the opposite journey from China to India. What was their contribution to the spread of Buddhism in China?

The monk, Huisi, and his more famous disciple, Zhiyi (also known as The Great Teacher Tiantai), spent their lives in the study of the basic principles of the Lotus Sutra which constitute the core of Mahayana teaching. Discuss the importance of their writings.

In writing about the monk Xuanzang the author claims “. . . the teachings that Xuanzang espoused represent a doctrinal  regression in the overall development of Buddhism in China.”  What leads the author to this conclusion?

Zhanran, one of the great foundational figures of Chinese Buddhism, lived during the Tang dynasty, a glorious era in Chinese culture. He became known as the restorer of the Tiantai school. What was the influence of his writings on the further spread of Buddhism across the Orient?

The author recounts the history of the persecution of Buddhism in Central Asia and China remarking that government oppression that forces people to abandon their faith sometimes awakens believers to value their faith more. Do you think that this is true?  Can you see examples of this in today’s world?

Buddhism evolved into a distinctive Chinese religion, influenced by older religions, which then spread to Korea and Japan. Has Chinese Buddhism influenced Buddhism in other parts of the world? Explain how.