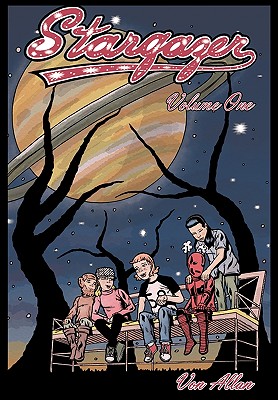 Volume 1: Three young friends are suddenly transported by a mysterious object to a far off magi

Synopsis: Marni is a young girl dealing with the recent death of her grandmother, which has left her emotionally devastated and struggling to cope. Granny Hitchins was a wonderfully curious woman, responsible for giving her granddaughter a rich sense of imagination and adventure, as well as an old and mysterious "Artifact." Granny Hitchins found the Artifact when she was herself a child and, with origins unknown, it provided a lifetime of adventure, speculation, and storytelling for herself, her son, and finally, her granddaughter. While not a replacement, the Artifact is nonetheless a treasured memento for Marni after her grandmother's death. With the love and support of her two best friends, Sophie and Elora, and the magic of the Artifact to comfort her, Marni is just beginning to cope with the loss of her beloved grandmother when her life takes an abrupt and strange turn. While the girls are examining the Artifact on a backyard camping trip, the object suddenly takes on a life of its own, transporting the three friends and their tent to a strange and distant world. After exploring the tent and their immediate surroundings, the girls discover that the Artifact has vanished, leaving them alone and afraid under a very alien sky. After summoning their courage, Marni, Sophie and Elora venture out to explore their alien surroundings, where they find a surreal world containing a robot, a mysterious far-off tower, and an illusive yet terrifying monster. Scared, yet buoyed by the stories and songs that they've heard while growing up, the three girls gather their meagre supplies and head out into the wilderness, determined to find a way home. A magical tale with the most unlikeliest of heroes, STARGAZER is an exploration of friendship, loss, and hope. By turns terrifying, poignant, and humorous, STARGAZER is part fairytale, part science fiction, and part adventure story. Anyone who has ever opened a book, looked up at the stars, or dreamed will love this story....and wish they'd been the one to find the Artifact.

Author Biography: Von Allan was born red-headed and freckled in Arnprior, Ontario, just in time for STAR WARS: A NEW HOPE. The single child of two loving but troubled parents, Von split most of his childhood between their two homes and, consequently, spent a lot of time in the worlds of comics and wrestling. He managed an independent bookstore in Ottawa for a number of years, all the while working on story ideas in his spare time. Eventually, he decided to make the leap to a creative life.

Von was recently featured in the documentary film I AM STILL YOUR CHILD written and directed by Megan Durnford (http: //iamstillyourchild.com). His artwork was also featured in a CBC Arts video profile at http: //www.cbc.ca/arts/exhibitionists/as-a-kid-his-mother-s-illness-scared-him-now-he-s-using-comics-to-come-to-terms-1.4281356

Von is the winner of a 2019 CBC Trailblazer award, star of a CBC Arts Exhibitionists short, recipient of the 2014 Corel Endowment for the Arts Awards, and artist/writer of the road to god knows...