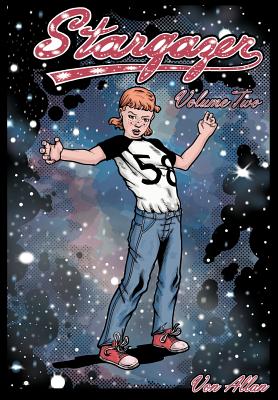 Volume 2: The adventures of three lost girls on a far-off world and their realization that, whi

In the concluding volume of STARGAZER, Marni, Elora, Sophie, and their new-found robot friend finally reach the distant tower they spotted earlier in their adventure. Expecting to find help at the tower, the girls are stunned to discover that it is not only old and heavily damaged, but also very clearly abandoned. As the friends are dealing with their disappointment and starting to plan their next move, they suddenly find themselves surrounded by an odd assortment of little creatures, similar to the robot. While not necessarily the help the girls wanted, the silent but friendly alien friends are nonetheless welcome companions. Once inside the ruined tower, the girls make a few discoveries, ranging from curious to downright ominous. While Elora goes off on her own, looking for answers to her own questions, Sophie and Marni are convinced that many of the answers they need can be found on the upper levels of the tower, on the other side of a long-ago landslide of rubble and boulders. With the return of the monster that threatened them at the start of their adventure, the girls must unite to face their fears and fight for their lives. Can the power of friendship and imagination get them safely home? And does their magical quest have a fairytale ending?

Von was recently featured in the documentary film I AM STILL YOUR CHILD written and directed by Megan Durnford (http: //iamstillyourchild.com) and produced by Katarina Soukup of Catbird Films (http: //catbirdfilms.ca). His artwork was also featured in a CBC Arts video profile at http: //www.cbc.ca/arts/exhibitionists/as-a-kid-his-mother-s-illness-scared-him-now-he-s-using-comics-to-come-to-terms-1.4281356