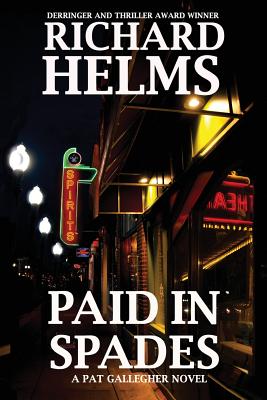 Paid in Spades is a 2020 Shamus Award Nominee.

Thriller Award-winning knight-errant Pat Gallegher (Juicy Watusi, Wet Debt) returns in this steamy, action-drenched New Orleans tale. A failed seminarian, retired forensic psychologist, and disgraced college professor, Gallegher left security behind to become a jazz cornetist in a dive bar off Toulouse Street in New Orleans. To balance the flimsy scales of his brittle karma, Pat Gallegher now finds the irretrievable and protects those who have nowhere left to turn.

Gallegher owes Cabby Jacks a debt that can never be repaid, and now Jacks has disappeared. The only clues to his whereabouts are scribbles in an appointment book-a name and a time. At the same time, Gallegher's girlfriend, social worker Merlie Comineau, has asked him to find a young girl's father who needs to give permission for minor surgery, or the girl might be placed in foster care. Juggling two cases, Gallegher encounters an itinerant guitarist with a dangerous past, opportunistic federal agents, a shotgun-toting landlord, hostile oil pipeline workers, Brazilian smugglers, a bumbling private eye, manipulative billionaires, and a diabolical conspiracy. With only his dwindling luck to protect him, any step in this minefield might be Gallegher's last