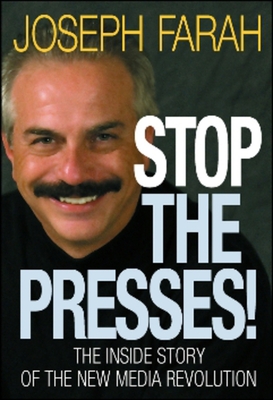 Stop the presses! You've heard newspaper editors shout that phrase in old movies. Joseph Farah was never a newspaper editor in the movies - he was one in real life. But he no longer works with ink, presses and newsprint. Fourteen years ago, Farah founded WorldNetDaily.com (WND.com) and became a pioneer on the New Media frontier. Today WND.com is the largest independent news service on the Internet. Stop the Presses! is not just Farah's story, but that of a new wave of media superstars who have forever changed the way Americans get their news and express their views. Rush Limbaugh, Sean Hannity, Matt Drudge, these are just some of the New Media names that old-school media like ABC News has acknowledged rule our world. This revolution has shaken the foundations of the mainstream media, eroding its ability to control the flow of information... and with it, the power to control the lives of millions around the world. The New Media revolution's beginnings have never been told - until now.

Joseph Farah is best known as the founder of the first independent online news service, WorldNetDaily.com, now known as WND.com, more than 20 years ago. Previously he had served as editor-in-chief of major market dailies, investigative reporter and foreign correspondent. He is the author of more than a dozen books including his most recent in 2017, The Restitution of All Things: Israel, Christians and the End of the Age.