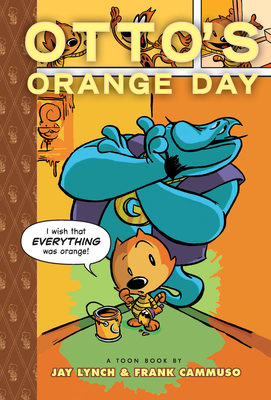 When Otto the Cat meets a magical genie, he knows just what to wish for: he makes the whole world orange! At first, this new, bright world seems like a lot of fun, but when his mom serves orange spinach for lunch, Otto realizes that his favorite color isn’t the best color for everything.

Frank Cammuso, who drew Otto’s adventure, lives in Syracuse, New York, where he is the award-winning political cartoonist for the Syracuse Post-Standard. He is the Eisner-nominated creator of Max Hamm Fairy Tale Detective, selected as one of the Top Ten Graphic Novels of 2006 by Booklist, and is at work on Knights of the Lunch Table, a middle school version of King Arthur and his Knights. His writing has appeared in The New Yorker, The New York Times, The Village Voice and Slate.

Jay Lynch, who wrote Otto’s story, was born in Orange, NJ (honest, ORANGE, NJ!). He now lives in upstate New York with his wife, his dog, and way too many cats. He is the founder of Bijou Funnies, one of the first and most important underground comics of the Sixties, and for many years wrote the weekly syndicated comic strip, Phoebe and the Pigeon People. He has helped create some of Topps Chewing Gum’s most popular humor products, such as Wacky Packages and Garbage Pail Kids.
Loading...
or
Not Currently Available for Direct Purchase