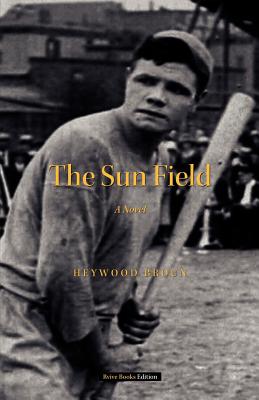 A long out of print novel (originally published in 1923 and never reprinted), with a new introduction by best selling novelist Darryl Brock (author of If I Never Get Back). Heywood Campbell Broun was a well known American newspaper writer, who helped found the American Newspaper Guild. Broun championed the underdog, criticized social injustice, and supported labor unions. He died in 1939. The Sun Field is a very modern novel, with a strong feminist character, a complicated love story, and New York baseball of the 1920's at its center, with another lead character plainly modeled on Babe Ruth. Broun was a sportswriter, whose love of baseball and brilliant writing style shines through this book. A treat for contemporary readers.

For the better part of two decades, Darryl Brock was a history, English, and psychology instructor in San Francisco Bay Area high schools. He holds a BA from the University of Redlands and has many graduate units in history at UC Berkeley. He has served as a writing consultant to the State of California and worked with Educational Testing Service to establish essay-scoring programs. Since 1984, Brock has been a full-time freelance writer, and is the author of numerous articles and reviews, many of them about early baseball and/or Mark Twain. He is an accomplished public speaker on the subjects of the Red Stockings, early baseball in general, and his experience in researching those pioneer pros. He is heavily involved in the world of baseball, attending Society for American Baseball Research (SABR) regional meetings and occasionally national conventions, as well as other baseball organizations' functions. Darryl Brock lives in Berkeley, California, with his wife and daughter.
Loading...
or
Not Currently Available for Direct Purchase