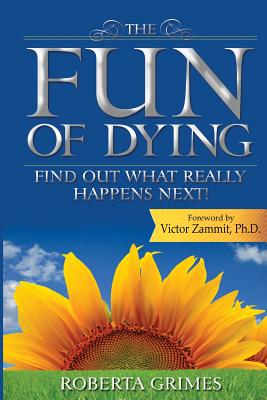 The Fun of Dying (Paperback)

Find Out What Really Happens Next

Roberta Grimes had an experience of light when she was eight years old that started her on what became an all-consuming hobby: she spent the next half-century researching the afterlife in an effort to better understand her experience. In the meantime she graduated from Smith College as a religion major and then from Boston University School of Law, and she began a small-business law practice. Happily married for 41 years, Roberta and her husband, Edward, have three grown children and four young grandchildren. After decades of afterlife research, Roberta eventually published The Fun of Dying - Find Out What Really Happens Next! (Greater Reality Publications, 2010), and in recent years she has traveled extensively to help people better understand that we are in fact eternal beings and we are infinitely loved. She has been writing fiction since the mid-seventies, when she wrote the first draft of Letter From Freedom. She jokes that it is easy to write a historical novel when you are in the middle of living that history! Roberta rewrote Letter From Freedom at least a dozen times as she taught herself to write, and she then published two novels, Almost Perfect (Berkley 1992) and My Thomas (Doubleday 1993, BOMC Alternate) before work and family intervened. With her children grown and her legal career moving toward part-time, Roberta is returning now to the Letters From Love series that she first began to think about more than thirty years ago. The first two novels in this series, Letter From Freedom and Letter From Money, were published by Wheatmark in March of 2014. Her six planned novels span almost five hundred years and tell four fresh and engaging love stories that are rooted in what the afterlife evidence tells us is true about human nature. They constitute a reconsideration of everything that we thought we knew about ourselves. The two characters that link the novels are a multi-billion-dollar American fortune and an island in the South Atlantic where a culture has developed that is in every way the opposite of modern American life. Based not in rules and restrictions but in freedom of mind, the Atlantican system fosters deep human unity and an extraordinary core-deep joy. Atlantica is a place where human life works as it never really has worked before, and it takes six novels and a lot of living for us to begin to understand why. To learn more visit RobertaGrimes.com
or
Not Currently Available for Direct Purchase
Copyright © 2020 American Booksellers Association