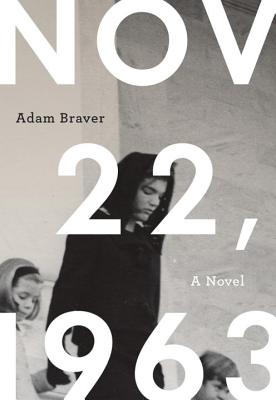 “This blend of facts and Braver's wonderful sense of imagination is an intimate look into the thoughts and feelings of Jackie Kennedy as she deals with the tragic events of November 22 as First Lady, and also as a wife who is devastated by the sudden loss of her husband. This book has a haunting effect and you will want to read it over and over again.”
— Sue Woodman, A Novel Idea, Bristol, RI
View the List

November 22, 1963 chronicles the day of John F. Kennedy's assassination and explores the intersection of stories and memories and how they represent and mythologize that defining moment in history.

November 22, 1963 chronicles the day of John F. Kennedy's assassination and explores the intersection of stories and memories and how they represent and mythologize that defining moment in history. Jackie's story is interwoven with the stories of real people intimately connected with that day: a man who shares cigarettes with Jackie outside the trauma room; a motorcycle policeman flanking the motorcade; Abe Zapruder, who caught the assassination on film; the White House servants waiting for Jackie to return; and the morticians overseeing President Kennedy’s autopsy.

Adam Braver is the author of five novels, most recently Misfit. His books have been selected for the Barnes and Noble Discover New Writers program, Borders' Original Voices series, the IndieNext list, and twice for the Book Sense list, as well as having been translated into Italian, Japanese, Portuguese, and French. He is on faculty and writer-in-residence at Roger Williams University in Bristol, RI. In addition to having taught for the University of New Orleans' Low Residency MFA program, he's also been a regular writer-in-residence at the New York State Summer Writers Institute.

"Braver's collection is a piercing portrait of those who experienced the Kennedy assassination first-hand." Steve Almond, author of My Life in Heavy Metal

"I had thought that Don DeLillo's Libra was the last fictional word on the JFK assassination, but I was wrong. Like a sublime actor, Adam Braver inhabits these characters, especially Jacqueline Kennedy, in a way that seems brave and heartbroken and true. This is a haunting history play, of private agonies wrenched onto the public stage."
April Bernard, author of Swan Electric

"I would never have thought there was a new way to view a moment so thoroughly dissected. Turns out there is. Quite an achievement."
Suzanne Kleid, KQED

"November 22, 1963 is more than an intricately imagined microhistory of the primary American trauma of the late 20th century; it's also an affecting portrait of the then First Lady, simultaneously devastated and resilient as she moves from embodying her country's image of someone who controls fortune to someone who's been flattened by it."
Jim Shepard, author of Like You'd Understand, Anyway

This extraordinary reconstruction blends fact and imagination with a subtlety that utterly dissolves the line between public and private. It's the intimacy, the closeness we come to these (mostly) well-known protagonists, that is so shocking and moving. Adam Braver has pulled off quite a feat, realigning all our notions and expectations of historical fiction.”
Phillip Lopate, author of Waterfront and Portrait of my Body

"Adam Braver has a wonderfully rich imagination and his grasp of historical characters and settings is both deep and natural. I would gladly read anything he writes."
Dan Chaon, author of You Remind Me of Me and the National Book Award Finalist Among the Missing

"With a captivating mix of fact and fiction, Braver chronicles the events surrounding JFK’s assassination to moving effect. The event is no stranger to the literary world, but Braver’s recreation, owing to small and often previously off-camera details, remains hauntingly original. Some of these details, like the ones that open the book and dwell on Jackie’s fashion preferences, present a factual backdrop against which later scenese.g., where Jackie refuses to remove her blood-splattered pink suittragically play out. Others, like the way JFK’s eyes keep popping open during the autopsy, underscore the grisly reality of his death. While the accumulation of small moments gives the book its weightiness, the stories of people peripherally associated with the assassination make the book sing; through the experiences of the Texan who sold the government Kennedy’s casket, the mechanic in charge of the limousine in which Kennedy was shot and numerous others, Braver reveals the tragedy of a national story that decades later can still be acutely felt."
Publisher's Weekly

"This terse, tense, tough novel is absolutely riveting...Every rose petal, drop of blood and splatter of brain, every movement and comment resonates with history as if trapped within a claustrophobic nightmare. Braver keeps this solemn and somber tone throughout, his brisk, often lyrical declarative sentences as direct and translucent as the characters are unable to be."Sam Coale, The Providence Journal

Braver is a terrific writer, an observer of the most acute details; throughout the book, he traces the subtle interactions of his characters as they collide and move apart. One of the most moving interactions here takes place between Jackie and an ambulance driver named Al Rike as they share cigarettes outside the trauma room where her husband's body lies...in this tiny glimmer of connection, whole universes of emotion are uncovered.”David Ulin, Los Angeles Times Book Review

"This is fiction of course, but it has the ring of truth...And it is both painful and fascinating, like rubbernecking at an accident, to watch. With an audacity of confidence and a sure sense of fiction's ability to tell eternal truths better than history, Braver re-creates the day the world changed." Jay Strafford, Richmond Times-Dispatch

"Beautifully written, November 22, 1963 blurs the line between novel and journalism into something more powerful than eithera visceral story of an unthinkable event that continues to touch millions, 45 years later."Michael E. Young, The Dallas Morning News

"Adam Braver's November 22, 1963 focuses on the singular event of President Kennedy's assassination, fusing fiction and fact from eyewitnesses and other sources to make for a blazingly original, brilliantly concretized historical novelfrom the author of Mr. Lincoln's War."ELLE

Braver has achieved more than a skillful retelling of a particularly morbid moment in American history. With its collage-like structure and postmodern blend of fact and fiction, November 22, 1963 raises fascinating questions about how we perceive history and the ways in which personal and collective experience intersect.”
Alexis Nelson, The Oregonian

"You would think that by now every and any thing that could have been written about the murder of the president has been said a dozen times over...Yet this outstanding piece of non-fiction fiction from Adam Braver manages to do so, and thus makes the book very much worth the time and money to buy and read." Neil Flowers, Feminist Review

"Braver’s use of multiple viewpoints, engaging personal insight, and short blocks of prose propel readers through this impressive example of historical fiction."Library Journal

"Adam Braver has done something that might have seemed impossible not long agohe's created a fresh look at the events of November 22, 1963...Braver has found a way to once again dip into this event that shattered a nation, and reminds us of how devastating a day it was without simply re-hashing what others have written before. It's a bold task for a writer, begin to write about something that every reader picking the ball up already thinks they know the ending to, but Braver was more than up to the task."Dan Wickett, Emerging Writers Network

"This is historical fiction at its best: intensely researched and beautifully written."Erika D., Book Bargain Reviews

"One may feel drawn into the experience of various characters, while simultaneously treading above some darker, plunging depth. At other moments, there is only the residue of memory, the granite presence of fact...[Braver] writes with the seductive concision of an alternate commission, a tautness that gives authority to speculation and authenticity to the emotional valences, retrained as they are." Ron Slate, On the Seawall

"The successes of November 22, 1963 lie in Braver’s ability to gently and respectfully reside, like a professional surgeon might, in the stomachs and minds of the people who lived through that day...Halfway through November 22, 1963, you realize the novel is somehow not about JFK at all, but about us. A lesser writer would have failed at piecing this story together in such a way that we are okay reliving that monumentally awful day, but in Braver’s hands, we come back to the present wiser versions of ourselves, if also a bit sadder." PDX Writer Daily

"Braver’s novel shows what can be done when a writer delves deeply into the textures and facts of a historical event about which we thought we knew everything. Of course we did not; we never know everything. His curiosity and reconstruction brings to life the human drama in a way that Oliver Stone and a roomful of conspiracy buffs never could. Yet the conspiracy buffs get all the press. Braver’s novel deserves a bigger share."Don Graham, Texas Observer

"Spellbinding...a mesmerizing tidal wave of facts, portraits, episodes, and stories...It's a memorable novel about a day the nation would like to forget and needs to remember."Barbara Ardinger, ForeWord Magazine

"Adam Braver has crafted a fantastic novel weaving real events with careful fiction, sweeping us back to Dallas on the day of the JFK assassination." Elizabeth Lopeman, Eugene Magazine

"[Braver] doesn't overreach. Instead, he recounts that horrible day in November with no small measure of empathy, 'obliterating a moment' in his own words and taking it back to a place 'where even in violence the world seemed a little softer.'"the San Diego Union-Tribune

"...Braver shows himself to be a writer of acute judgment and talent. The degree of attention paid by the author to the micro-level of history lends his novel a humanity and perspective that had, I feared, been drained from popular representations of the assassination." Karl Whitney, 3:AM Magazine